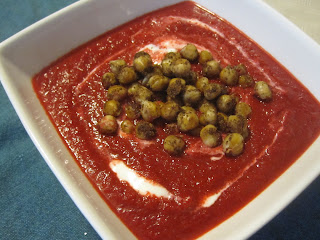 We ended up with a bunch of beets from my parent's garden again this year and I was intrigued by using them to make a curried soup. Although this is probably more appropriate for winter or fall since it's a hearty soup and relatively warm due to all of the spices. I made four large portions out of it, but you probably could easily do six smaller portions.

If you're not worried about keeping this vegan, we found that it was very tasty with a large helping of sour cream. It was also very delicious served with naan.

Chickpeas:  Preheat the oven to 375 degrees, and add rinsed and dried chickpeas to a small mixing bowl. Top with olive oil, salt, and tandoori masala. Toss to combine. Spread onto a bare baking sheet and bake for 20-25 minutes, or until deep golden brown and fragrant. Set aside to cool.

Soup: Heat a large pot over medium heat. Add oil, shallots, garlic and ginger. Sauté for 2 minutes, stirring frequently. Next, add beets, salt and pepper, curry paste, cinnamon, turmeric, cumin, and cayenne. Stir everything to coat the beets in the spices, then cover and cook for 4 minutes, stirring occasionally. Add coconut milk, vegetable broth, and coconut sugar.
Bring to a low boil over medium heat and then reduce heat to low, cover, and simmer for 15 minutes, or until beets are fork tender. Use an immersion blender to purée the soup until it is creamy and smooth.

Serve with an extra drizzle of coconut milk and one fourth of the tandoori chickpeas.