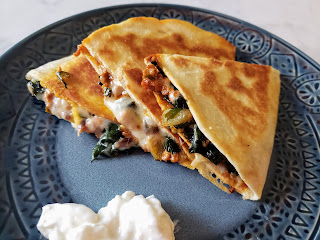 This might be my favorite ramp recipe this year. We've already made it three times and we're having it again for dinner tonight. It comes together really easily, the ramps + soy chorizo complement each other nicely, and it's a filling meal. For the longest time I've been weird about eating faux meat products. I will make an except for soy bacon but I don't love things like the Impossible Burger or soy turkey that can be used for sandwiches. A chain pizza place near us uses soy chorizo on one of their pizzas and now I think it's the greatest thing ever. I've used it in a few taco recipes but I think it really shines here when combined with the ramps.

After picking up a second order of ramps I still have a few more ramp blogs on deck for this week and next week!

Cook the ramps in a small skillet over medium heat and season the mixture with salt and pepper. After sauteing for a few minutes, add the soy chorizo and stir until heated through. Remove from the heat and set aside.

Heat the oil in a large skillet and carefully add both folded tortillas to the oil. Cook until golden brown on one side and then carefully flip the quesadillas with a spatula and cook on the second side until golden brown. Transfer to a paper towel lined plate and allow to rest for 1 minute. Cut into pieces and serve with Greek yogurt or guacamole. 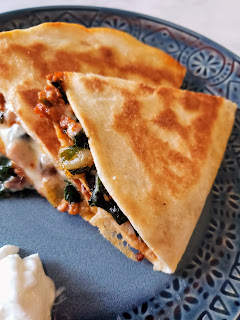