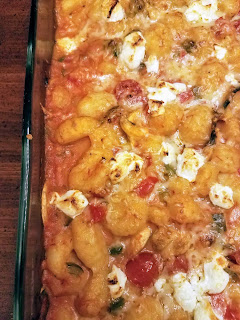 Tortellini Bake is hands down the most popular recipe I have ever posted on Vegetarian & Cooking. Posted in May 2013, I never expected the recipe to take off like it did. As of December 15th, 2018 Tortellini Bake has 222,422 views and is consistently ranked the number one blog of the week per my tracker (for reference the next most popular blog on Vegetarian & Cooking has 29,132 views). I even had to go in and add a watermark on all of my photos to prevent people from stealing them. When I started dating Dave he thought Tortellini Bake was great but he always wanted to add additional vegetables to the recipe. I wanted something simple, but flavorful to cook for dinner recently and decided to switch up the original tortellini bake a la Dave's favorite way (plenty of veggies) with gnocchi added instead of tortellini. I forgot to purchase mozzarella and parmesan at the store and used the cheese I had on hand. The result was a 9x13 pan of deliciousness. Dave thanked me for making this dish several times over the course of the evening and gnocchi bake has solidified it's place in my dinner rotation.

Start by heating a large pot of salted water over high heat until boiling.

While the water heats, cook the vegetables. In a large skillet sprayed with cooking spray (or with a little olive oil added) heated over medium heat add the diced green pepper, red pepper, and shallot. Saute for about 5 minutes or until slightly softened. Add the garlic and continue to cook over medium heat until the peppers, shallot, and garlic have softened. Remove from the heat and set aside.

In a smaller skillet with either cooking spray or olive oil, cook the mushrooms over medium heat until they have reduced by half. Drain any liquid from the pan and set aside.

Once all of the gnocchi is in the 9x13 pan, add the sauteed mushrooms and sauteed peppers, shallot, and garlic. Stir to combine. Next, add the jar of alfredo sauce and half of the jar of marinara sauce. Stir again to combine the gnocchi, sauce, and vegetables. Top with shredded Jarlsburg cheese and crumbled goat cheese and bake for 15 minutes at 350 degrees F. If desired, broil for an additional 5 minutes. Serve immediately. 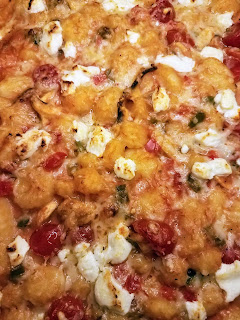 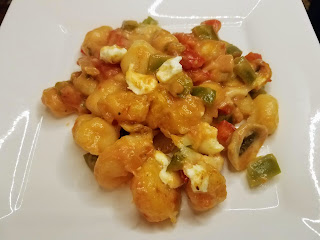