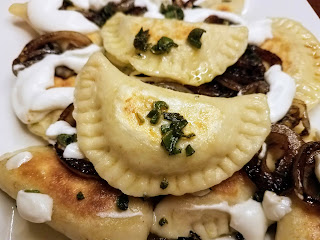 On Christmas Eve Eve we made pierogies for the first time and although it was a time consuming process, I'm so excited to make them again. I almost wanted to skip the sage butter sauce because we had already done so much work but the sauce was great with the pierogies and it added an additional depth of flavor since there were two different herbs already in the pierogies. The sauce and filling were full of flavor and the dough was the perfect texture. I think the added step of frying the pierogies adds a nice texture to them but you can skip it if you prefer to have them boiled only. Dave loved this as well and thought the balsamic caramelized onions were a nice complement to the flavors already in the pierogies. The sour cream and balsamic caramelized onions are of course, optional.

Recipe from The Bite House.

To make the dough, mix all the ingredients together with your hands until you have a smooth dough. Let cool for 30 minutes.

While the dough cools, make the filling by boiling the potatoes until fork tender, about 15-20 minutes. Strain them and let stand for 5 minutes to let the extra moisture out. Mash and add the cheddar, butter, herbs and salt. The mashed potatoes will seem thick, but you do not want to thin them out with water to make sure that the filling stays inside the pierogi shells.

To assemble the pierogies, cut the dough into four equal sections and set three aside. Roll out the remaining fourth of the dough until it's 1/8" thick.  Using a glass, cut out 3" circles and save the dough trimmings. Put about a 1/2 tablespoon of filling in the middle of each circle and wet the edges of the dough with water to help the edges seal. Close the pierogies and crimp the edges with a fork to make sure they're completely sealed. Repeat the process with the rest of the dough and form a ball with the trimmings, roll the ball out and make more rounds. We made about 32 pierogies. 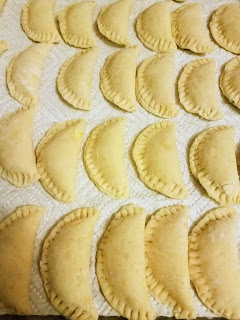 We served the pierogies with the sage butter sauce, sour cream, and balsamic caramelized onions. 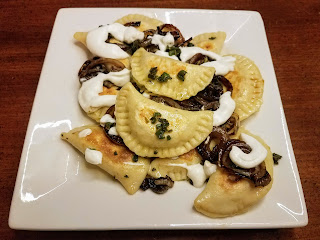 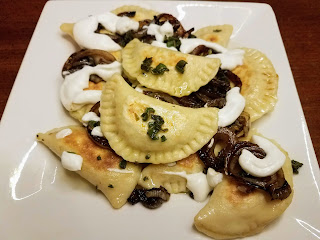 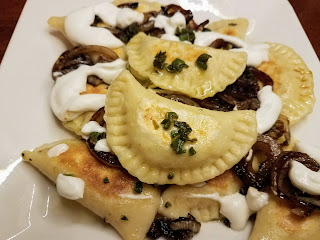 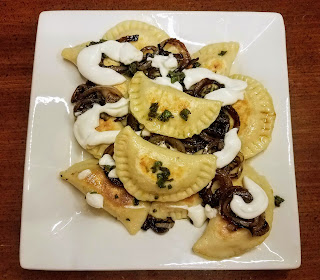 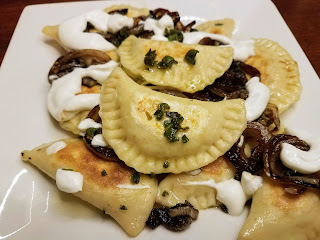