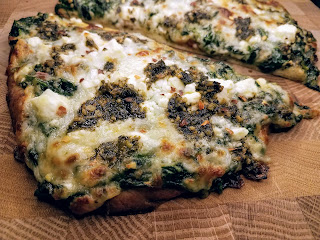 A few weekends ago the forecast called for snow every night which was supposed to result in at least 12 inches of snow. We decided to stock up on groceries early and planned to spend the entire weekend at home. In the end we only ended up with about 10 inches of snow, but since we're always so busy on the weekend it was a nice change of pace to spend time at home. This recipe was what we made on Saturday night of the snowstorm and served with a glass of wine. After spending time sleeping in (and skipping breakfast) I wasn't too worried about how decadent this recipe turned out to be. Initially, I had been skeptical about all of the cheese, pesto, and cream in this recipe but everything went together so nicely. Dave and I both loved it and wished that we had made two pizzas. We made this pizza using one large naan but it would also be good with the mini naans that you can buy in the store -- if you decided to make this using mini naans you would need four.

Recipe from Peas and Crayons.

Spread the spinach sauce onto the naan and then top it with the grated mozzarella and the feta cheese. Top with small dollops of basil pesto and then bake for 12 minutes. If you would like the golden color that you see here, broil the naan pizza for an additional two minutes before serving. Top with crushed red pepper flakes and serve hot. 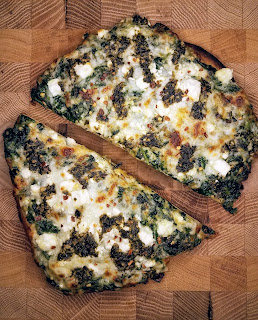