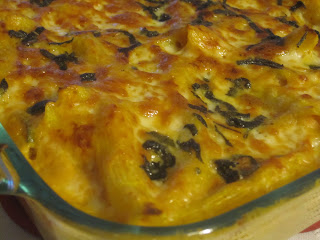 It's finally starting to feel like fall, which means it's time to break out the pumpkin and apple recipes. This was a perfect recipe to make on the Monday night after a three-day weekend. It was simple to put together, didn't result in too many dirty dishes, and gave us plenty of leftovers for the work week.

I might have under seasoned this, I thought the best parts were with the crisp white cheddar on top which helped to give the pasta a little more salt. I'm still trying to get into the pumpkin craze, sometimes I love it in recipes and sometimes I don't. This one left me with mixed feelings, I didn't love it, but I also didn't hate it. Overall, it was pretty successful, and Dave and I are happily eating the leftovers.

Preheat oven to 350ºF and spray an 8x8 pan with cooking spray.

Remove the sauce from the heat and stir in the parmesan cheese, 1/4 cup of the sage leaves and a pinch of nutmeg. Season to taste with salt and pepper, then fold in the penne. Transfer to the prepared baking dish and top with the shredded cheese and remaining sage. Cover the baking dish with foil and bake for 10 minutes covered, 10 minutes uncovered. I love a browned casserole top, so I broiled the penne for about 5 minutes. 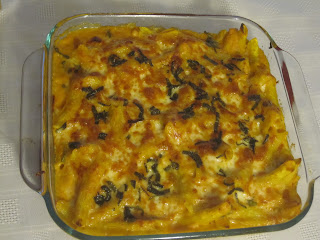