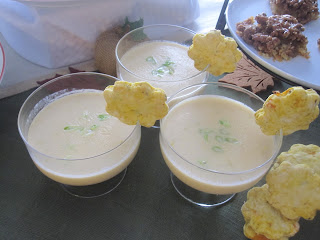 Happy Thanksgiving 2017! This year Dave planned the entire menu and then we spent a few hours putting it together (3 in total). If you wanted to do some prep in advance prior to Thanksgiving, you could make the dessert and these biscuits ahead of time and save the drink, side, and main dish for Thanksgiving Day. 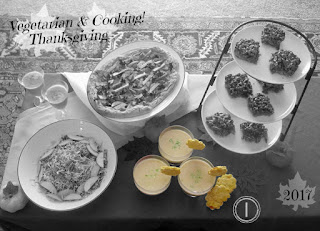 Dave was interested in pairing this soup with a side of its own, so instead of one recipe, there are two included here. Either would be fine on their own, but it was good together. I really enjoyed the soup, it was one of my favorite things that we've made recently, the biscuits were nice for dunking in the soup, but any bread you're already planning on serving would be fine if you would like to skip the biscuit step.

For this recipe we cut the recipe in half and ended up with 14 biscuits. Preheat oven to 375°. Line a baking sheet with parchment paper.

Make a well in the center of the flour mixture and pour in the butternut squash mixture. Stir until fully blended and a soft dough is formed. Knead the dough together into a ball and add a sprinkle more flour if your dough seems too wet or a splash of almond milk if the dough is too dry.

Turn the dough onto a lightly floured surface and roll to about 1/4 inch thick using a floured rolling pin.

Use a 1-inch cookie cutter to cut the dough into the desired shape. Then place the dough rounds about 1 inch apart on parchment-lined baking sheets.

Bake until fluffy and just lightly browned on top, 12 to 14 minutes. 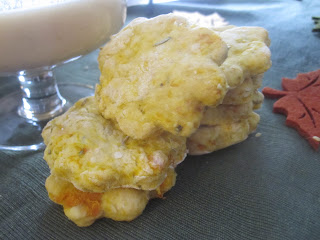 In a medium sauce pot, combine the vegetable broth, potatoes and leeks. Simmer until the potatoes are tender. In another small sauce pot, combine olive oil and flour to make a roux; cook over low heat for 3-4 minutes. Slowly add broth to roux in order to temper the mixtures, stir with a wire whisk until smooth. Add the ale, half and half, cheese and salt and pepper to the sauce pot. Simmer slowly until cheese is melted and serve. 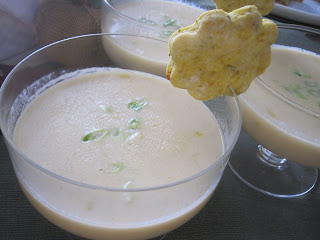