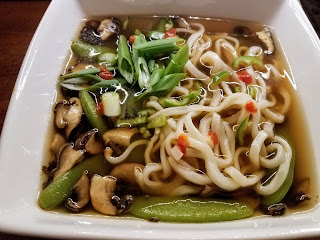 The weather keeps oscillating between tolerable and too cold to be outside. Even though we took a long walk outside today in a temperature that would never been considered biting, the middle of January is still soup weather.

Our favorite local grocery store allows you to order made to order pho which is good in a pinch, but it's very easy to just make it yourself. This recipe contains more traditional ingredients (with the mushrooms replacing the beef), but you can add tofu or edamame. This pho recipe is just the right amount of delicate and spicy to warm you up on a cool January day. Dave ate most of the leftovers for this and said that two or three days later this pho was just as good as it had been on day one.

Over medium heat, warm a medium sized soup pot. Add the cinnamon sticks, cloves, and star anise and toast until fragrant, stirring occasionally, about 3 to 4 minutes. Next, add the onion, ginger, vegetable stock, water and soy sauce. Raise the heat to bring the mixture to a boil, then reduce the heat to simmer the broth. Simmer for 30 minutes to give the spices and flavors time to flavor the broth.

While the broth simmers, prepare the rice noodles according to package directions and then set them aside.

Heat the oil in a medium skillet and add the mushrooms, along with some salt. Cook until the mushrooms are tender and lightly browned, about 4 to 6 minutes, then set them aside.

Once the broth is done cooking, strain out the onions, ginger and spices. Season the aromatic broth to taste with extra soy sauce and/or salt to taste.

Divide the broth into four bowls and add the noodles and mushrooms, along with any garnishes you'd like to add to make the pho yours. Serve immediately. 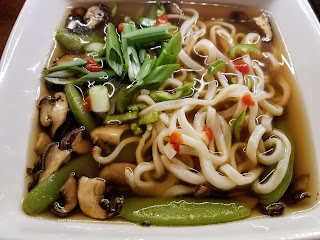 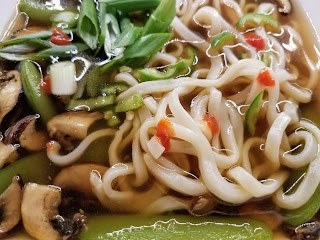