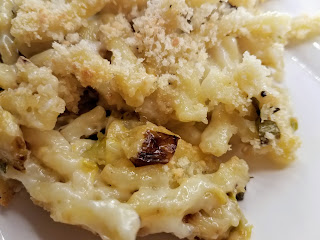 Everything in moderation right? Hopefully everyone else is still going strong on their 2018 goals, if that goal includes eating less and moving more, there is still room for mac and cheese. With the addition of a vegetable, it must count for something. This mac and cheese combines brussels sprouts with three kinds of cheese to create a welcoming sauce which envelopes the roasted brussels sprouts and pasta. The only change we made to the recipe was cutting each brussels sprout into eighths rather than halves. Dave wanted to have a piece of brussels sprout in each bite and I think it worked out great.

To start, preheat your oven to  375 degrees. Place the brussels sprouts on a baking sheet and toss them with the olive oil, season the brussels with salt and pepper to taste and bake for 30 minutes. If you haven't already cooked your pasta, start to do that now according to package directions until al dente.

While the brussels sprouts are roasting, heat a large saucepan over medium heat, then melt the butter. Sprinkle in the flour and cook in the butter until golden, 2-3 minutes. Pour in milk and whisk until combined. Season with salt and pepper. Let the mixture simmer until starting to thicken, about 5 minutes.

Remove the pan from the heat and stir the cheddar and fontina cheese along with a 1/2 cup of the parmesan cheese and whisk until smooth. Fold the cheese sauce into the cooked pasta, add the roasted brussels sprouts. Then transfer everything into a 9x13 baking dish. In a medium bowl, combine the panko breadcrumbs and the remaining parmesan cheese. Season with salt and pepper and sprinkle over pasta.


Bake the pasta until bubbly and golden for 25-30 minutes. Serve immediately. 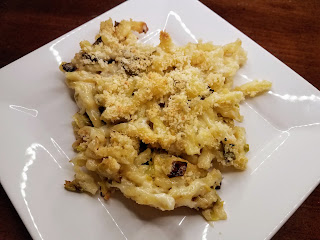