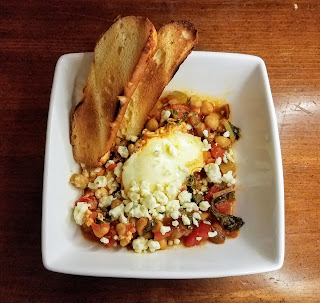 This is the first shakshuka post on this blog but not the first time we've made shakshuka. A few years ago we went through a meal box phase while trying to figure out balancing working full-time and our commutes. After trying Blue Apron which certainly had more adventurous ingredients, we settled on Hello Fresh for a few months. Despite what the ads say, even as people who cook frequently, it took us way more than 30 minutes to churn out a Blue Apron recipe. In one of our boxes we received the ingredients for a spicy shakshuka recipe and ended up really enjoying it. Shakshuka is a dish made of eggs poached in a sauce of tomatoes, chili peppers, and onions that originated in Tunisia and is now popular in both Middle Eastern and Mediterranean cuisine. In short, it's the perfect breakfast for dinner.

Now that we're getting fall greens in our CSA basket we'll need to turn to heartier recipes to use up the ingredients. This shakshuka used onions we had received in a previous box as well as eggplant, rainbow chard, and a pepper from our most recent box.

Recipe from the Roasted Root.

To make the shakshuka sauce: In a large skillet, heat the oil to medium. Add the onions and peppers, and saute, stirring frequently until softened, about 8 minutes. Next add the minced garlic and saute for 3-4 more minutes. Add the cumin, cayenne pepper, salt, and harissa paste. Stir to combine. Add the diced tomatoes and bring the mixture to a boil. Allow the sauce to cook for at least 10 more minutes, stirring occasionally.

Meanwhile, salt the eggplant pieces and let sit for five minutes, rinse and pat dry. With cooking spray or olive oil, cook the eggplant in a separate skillet over medium heat for about eight minutes. Stir, add the rainbow chard and cook for an additional minute. Combine in the larger skillet, the eggplant and chard, chickpeas, and the shakshuka sauce. Bring it back up to a simmer, make four depressions in the sauce, add the eggs, cover and cook on medium-low until the egg whites are firm.

Serve sprinkled with feta cheese and chopped parsley, with a side of toast. 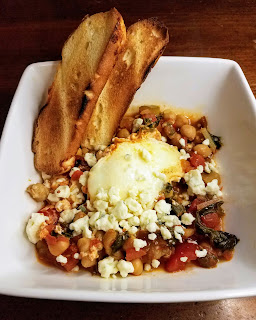 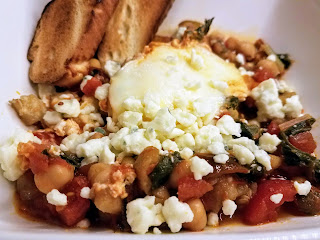 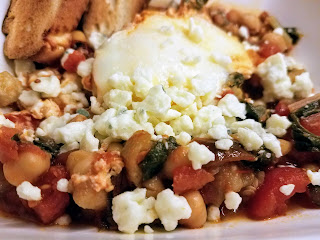 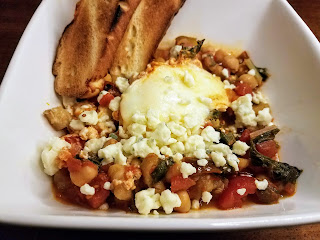