Lutenitsa and Labneh with Naan 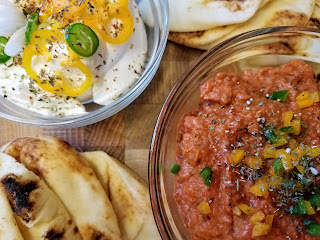 On a recent trip to New Orleans with our group of friends we decided to try Shaya, a restaurant focusing on approaching "Israeli cuisine as a grand mosaic, drawing influence and inspiration from North Africa, the Middle East, Eastern Europe, Turkey and Greece." We all had a lovely experience and for Dave and me it was hands down the best place we ate in NOLA. As part of our meal we shared a Salatim plate of three items including labenh (a yogurt dip), lutenitsa (an eggplant and pepper dip), and tabouleh. Everything was served with the best pita any of us had ever eaten, it's seriously a must visit next time you're in New Orleans.

The labneh and lutenitsa were incredible together and it was something I immediately wanted to recreate at home when we received eggplant in our CSA basket. Since we enjoyed them together at Shaya I decided to make one post combining the two recipes since they are both relatively simple. Either could act as a stand alone appetizer if you wanted to serve just one. 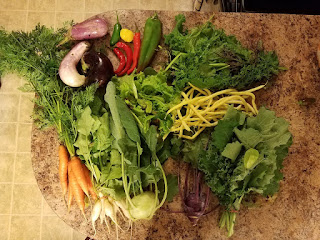 Whisk together yogurt, salt, and lemon juice. Scrape the mixture into several coffee filters and place into a colander over a bowl or into a salad spinner. This will allow the excess liquid to drain out of the yogurt so that it is thicker. Allow to drain over night in the fridge.

Once you're ready to make the labneh discard the liquid and add the yogurt to a bowl. Whisk together and serve with the desired toppings. 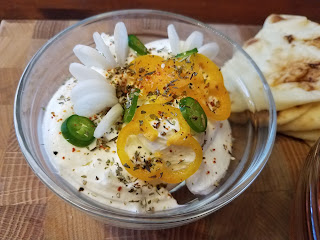 Core the red peppers and peel the eggplant. Cut the peppers in half and dice the eggplant. Roast both at 400 degrees for 30 minutes, making sure to turn the vegetables halfway. Allow to cool slightly. Put all of the ingredients into a food processor or blender and combine. 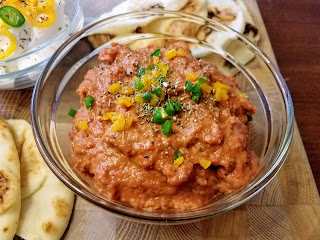 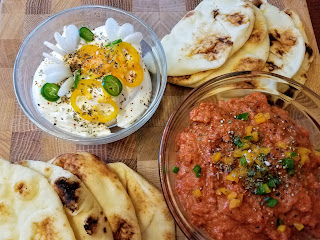