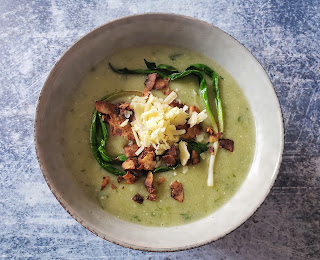 This blog signifies the end of my grocery store avoidance and our first produce delivery. I finally caved and placed a pick-up order at Giant Eagle on Monday and that means this is the last blog where we were surviving off our pantry staples and small grocery pick-up on March 19th. We also received our first bi-weekly produce order from Perfectly Imperfect Produce in Cleveland. They rescue fruit and produce that is destined for the landfill. I'm happy to keep supporting locally owned businesses during this time and we're using those boxes to supplement our bi-weekly trips through the drive-thru farmers market.

This chowder used the last of the ramps I picked up two weeks ago. I received the potatoes via my Perfectly Imperfect Produce box but everything else is something that we already had on hand. I thought the potatoes really helped temper the flavor of the ramps to make it a little less aggressive. The coconut milk and coconut bacon did not give this an overwhelming coconut flavor and the coconut milk was the perfect way to add some creaminess to the chowder.

Recipe slightly adapted from Health Starts in the Kitchen.

In a large pot saute the ramps in the coconut oil until soft. Add the potatoes and the vegetable broth then simmer covered for 20 minutes or until the potatoes are fork-tender. Season the broth.

Reduce the heat to low and add the coconut milk and shredded white cheddar. Stir well to combine and cook until the white cheddar is fully incorporated. Check the seasoning and make any adjustments.

If you prefer a thicker soup use an immersion blender to blend about half of the soup. 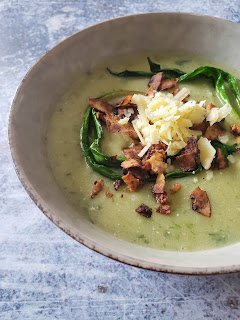