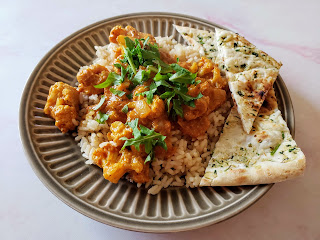 Our latest Chopped challenge involved cauliflower and tomatoes (any tomato product you had on hand) which meant I could finally make this recipe I'd been eyeing. Overall, this was very simple to make and the leftovers were great. I thought the sauce had nice flavor but if you're looking for spice you would need to ramp up the heat from the original recipe. We still have several packs of frozen naan from Trader Joe's on hand which was nice for serving but any combination of naan and rice would work. Certainly, the frozen naan is not the same as the delicious naan that comes with Indian takeout but this certainly can help with some of those takeout cravings if your favorite restaurant is currently closed. This dish also won our weekly Chopped challenge and I chose wine as the next ingredient so stay tuned for some wine cooking options!


Preheat the broiler to high and grease a large baking sheet with olive oil.

In a large bowl, combine the cauliflower, 1/3 cup coconut milk, 2 cloves chopped garlic, 1 tablespoon grated ginger, and a pinch of salt. Let sit 10 minutes and then spread the cauliflower in an even layer on the prepared baking sheet. Transfer to the oven and broil for 3-4 minutes or until the cauliflower is just beginning to char on the edges (**Note in my oven this process took at least 10 minutes**).

While the cauliflower chars heat the olive oil in a large skillet (one that will eventually fit all of your cauliflower). Add the onion and cook for 5 minutes then add the remaining garlic and ginger. Cook for another 5 minutes and then stir in the garam masala, curry powder, turmeric, and cayenne, and cook for an additional minute.

Add the tomato paste and the remaining coconut milk to the skillet and stir to combine. Bring the sauce to a boil for 5 minutes or until the sauce begins to thicken. Add the coconut oil and then the cauliflower. Stir to combine and cook, stirring occasionally, until the sauce has thickened. Season with salt and pepper and serve over rice. 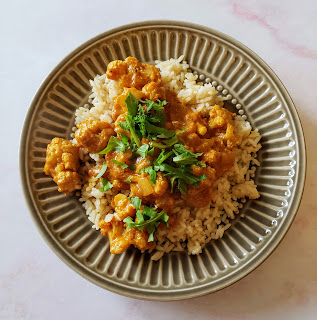