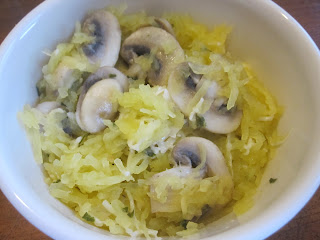 It's spaghetti squash season again! My parents have had great success growing spaghetti squash in their garden again this year and seem to have one or two ready for me to take each week. There will be an increase in spaghetti squash recipes, it's incredibly easy to make and a healthier alternative to pasta.

In a large skillet, add olive oil, garlic and thyme. Cook for 2 minutes over high heat and add mushrooms. Cook until mushrooms are golden brown. Pour the mushroom mixture into the large bowl of spaghetti squash. Stir to combine.

Mix in the parsley and parmesan cheese, then season with salt and pepper. 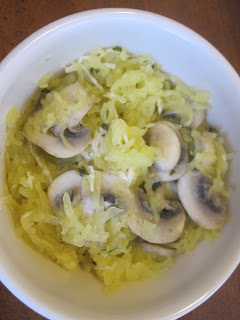 This recipe was just okay. I prefer my spaghetti squash recipes to have a little bit of sauce on them, so this was a little too plain for me. I thought the mushrooms were nice in the dish, but it needed a little something extra.