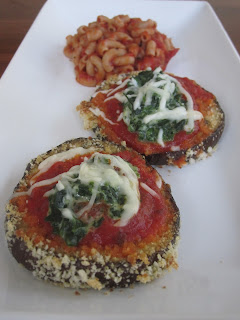 The eggplants are starting to plump up in my parents' garden, allowing me time to get together some great eggplant recipes. Eggplant parmesan is one of my favorite dishes, it's my go-to order at an Italian restaurant. This version is a modern play on that classic.

In one bowl add the panko and parmesan. In the other add the egg and whisk it together. Season the eggplant with salt and pepper, then dip the eggplant slices into the egg, then panko mixture. You might need to press the mixture onto the slices to adhere it to the eggplant. Coat slices on both sides with cooking spray, and arrange on baking sheet. 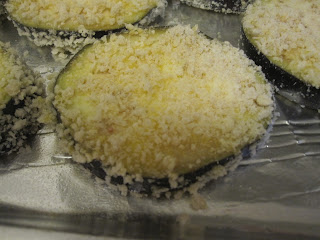 While the eggplant is baking prepare the creamed spinach, yes you can make it yourself, but on week nights I'm all about convenience.

When the eggplant is browned on both sides, spread marinara sauce onto the eggplant slices (still on baking sheet). Spoon spinach over top, leaving border of sauce visible. Sprinkle with mozzarella, and bake 4 to 5 minutes, or until topping is heated through. 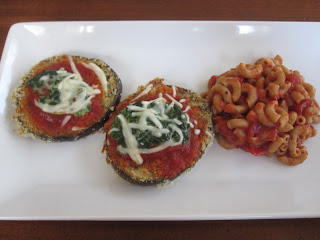 I prepared a little side dish of pasta with marinara sauce using a half-full box of whole wheat macaroni noodles. If you're trying to eat lighter, you could serve the eggplant slices with a side salad instead. 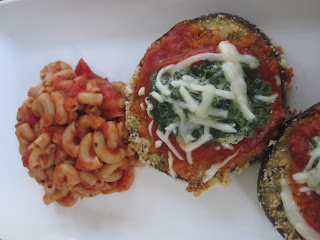 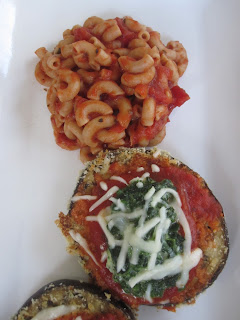 This was incredibly easy to make, especially since I used pre-packaged creamed spinach. For the most part, clean-up wasn't difficult either, because the eggplant slices were on a pan lined with foil, so essentially the only prep dishes were the two bowls used for breading the eggplant.