I initially had another recipe picked out to be the side dish for this meal but when a friend sent me this recipe I couldn't resist making a swap. The orange zest pairs nicely with the cocktail and these cooked nicely alongside the Red Wine Caramelized Onion Goat Cheese Tarts. If you decide to cook them at the same time just use the temperature from that recipe and make sure your brussels sprouts are cut relatively small. Otherwise, these will do just fine in the oven on their own if you have prepared the tarts in advance. This recipe was simple to make but the flavor of the dried cranberries and orange zest really pop in the final dish. 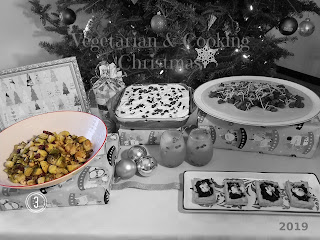 Preheat your oven to 400°F. On a large rimmed baking sheet, toss the brussels sprouts with the olive oil, sprinkle with salt and pepper and toss again. Roast, stirring twice, for 20 to 25 minutes, or until starting to brown.

Add the dried cranberries, hazelnuts, and orange zest. Stir well and continue roasting for at least another 5 minutes, or until the brussels sprouts are golden brown. Test a few of varying sizes to make sure they are cooked all the way through. 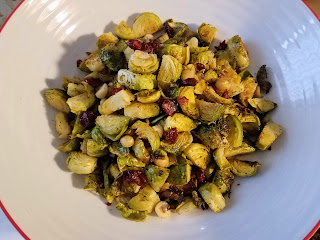