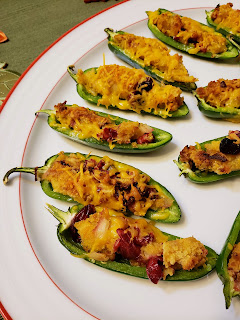 Happy Thanksgiving week! This is obviously a strange year and with most people doing smaller Thanksgiving meals this year in their individual households, I hope these recipes are more helpful than ever! This is the 9th year that I've put together a Thanksgiving feast for the blog and while we typically end up with a ton of leftovers this year's menu is perfect for two people who don't want to stuff their fridge after Thanksgiving dinner. 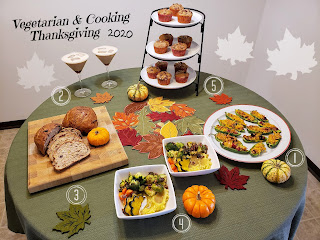 This appetizer was very easy to put together because I was able to pick up mini-loaves of cornbread at my local grocery store. If you have a favorite recipe or prefer to make your own that's totally an option but I'm all about shortcuts in the kitchen especially when I'm trying to make several other items on the same day. I used all four of the cornbread loaves to make the stuffing but ended up with slightly less than half of a pie pan left. If you're not going to make more jalapeno poppers you may want to cut back on the cornbread if you don't want leftovers. I thought this turned out really good and it was easy to adjust the recipe to serve just two people. We ended up with 12 poppers and Dave took the remaining for lunch.

Recipe slightly adapted from We Are Not Martha.

Crumble the cornbread and mix together the cornbread crumbles, cooked onion, cranberries, a pinch of thyme, the vegetable broth, and the egg. Combine well and press into a greased 9 inch pie pan. Bake at 350 for 35 minutes (check halfway to see if your pan needs rotated). Remove from the oven and let sit for a few minutes.

Stuff the jalapeno halves with the stuffing, top with the shredded cheddar, and then bake at 400 degrees for 12-15 minutes. 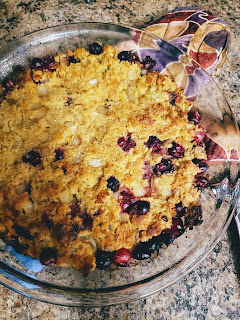 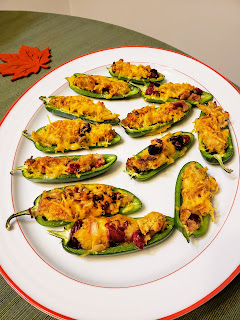 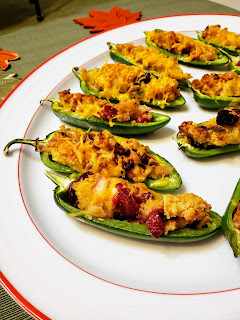 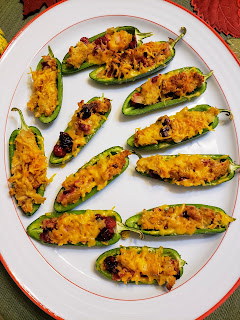 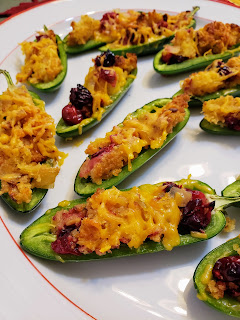