It's CSA time again! Things have been incredibly busy the last few months as I searched for, purchased, and moved into my first house. BUT it's also CSA season again which is my favorite so I'm hoping to post more as we move into fall. This year, same as last year I think, I have two months of CSA pick-ups with Birdsong Farm. This post is from the first share which was earlier this month but hopefully I'll be able to catch up on all of the posting soon. 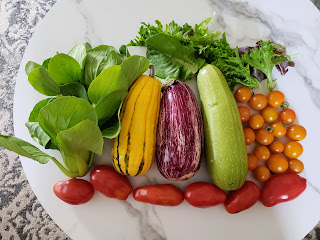 There was a preview email for the ingredients so I saved this recipe to use up as much of the share as possible. There were so many veggies (I had a few leftover zucchini from my parent's garden and purchased another eggplant) that I ended up doubling the recipe to use everything.

Preheat oven to 400°. Add the asparagus, zucchini, eggplant and corn to a large sheet pan (you might need two). Drizzle with olive oil, maple syrup, chili powder, salt and pepper. Toss well to coat. Roast for 10-12 minutes. Then stir the veggies around and roast an additional 5-7 minutes or until the vegetables are starting to caramelize.

When the vegetables are almost done make the polenta.  Pour the water and milk into a medium size saucepan and bring to a boil. Lower the heat to medium and slowly whisk in the polenta. Cook, stirring frequently, until the polenta is soft and thick, about 10 to 12 minutes. Stir in the parmesan cheese, 2 tablespoons butter, salt, and pepper.

Meanwhile, heat 6 tablespoons butter in a small pot until melted and starting to foam. Remove from the heat and whisk in the harissa paste.

To serve, divide the polenta among four bowls, top with the roasted vegetables and a soft-boiled egg (or two). Drizzle with the harissa butter and top with herbs. 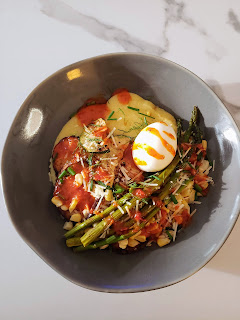 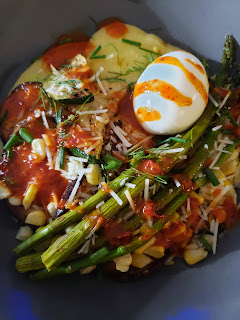 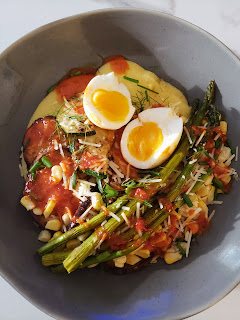