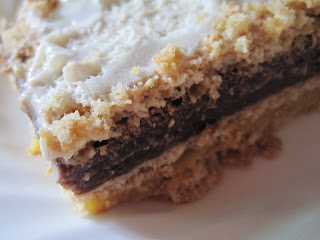 Eclair cake has been my favorite sorority dessert for years now so when I came upon this variation of the recipe, I had to try it.

Due to the ingredients I had on hand I decided to make some changes rather than use the recipe that I originally found -- you can find that basic recipe here.

Mix the packages of pudding in two separate bowls.

Add a second layer of crackers on top of the vanilla pudding. Top this layer with the chocolate pudding.

Add one more layer of graham crackers and then top with the whipped topping.

Refrigerate for several hours before serving (I had mine in the fridge for twenty-four hours).

I can't say that this dessert lived up to the eclair cake I've previously had (I will find a recipe for that and make it some time), but it was tasty. It was also inexpensive and easy to make and would serve a large crowd -- be aware that it is messy to eat.