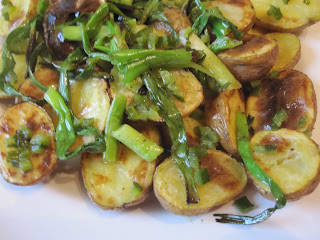 Happy Grilling Wednesday! This is my second favorite series (I can't help it, I really love Soup Wednesday) because there are so many great vegetarian and vegan options that can be made on the grill. Most people get pumped up about grilling burgers, although I do have some awesome veggie burgers planned for later this summer, but that's not the only thing you can create with a grill.

In a large saucepan, cover the potatoes with water and bring to a boil. Add a generous pinch of salt and simmer over moderate heat until just tender, about 15 minutes. Drain and let cool slightly, then halve lengthwise.
Meanwhile, heat up the grill, I recommend adding a veggie pan to prevent the potatoes from falling through the grates. Brush the potatoes with oil and season with salt and pepper. Grill cut side down over high heat until lightly charred, 5-10 minutes. Transfer to a plate. 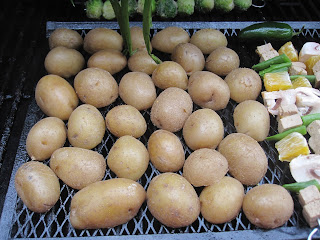 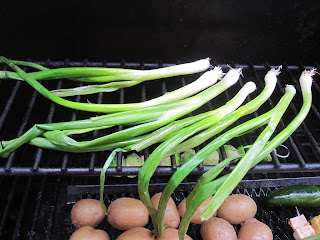 Brush the scallions with oil and season with salt and black pepper. We cooked the scallions over high heat, but on the top rack of the grill, that way we could catch them if they fell through. You'll need to turn them until lightly charred, about 2 minutes. Transfer to a plate, cover with plastic wrap and let steam for 10 minutes. Cut the scallions into 1-inch lengths.


In a large bowl, whisk the 1/3 cup of olive oil with the vinegar and lemon juice. Add the scallions and potatoes and toss well.  Scatter the jalapeño slices on top, season with salt and pepper. 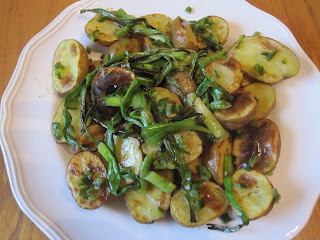 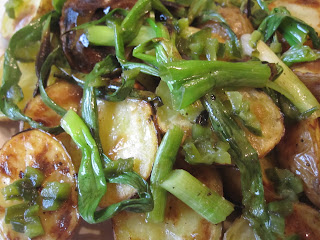 I liked this, I thought it was a cool idea to make a grilled potato salad and it was nice to not have it coated in a heavy mayo based dressing. Dave on the other hand wished this had the mayo based dressing instead of the one it had, not that he didn't like it, but that's what he was expecting. Overall I thought it had good flavor and there was a nice smokiness from the items which were grilled.