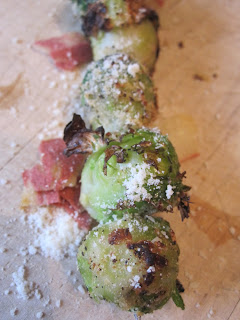 It's Grilled Wednesday again! I really enjoy roasted Brussels sprouts and thought that grilling them would taste just as great. It's probably best to skewer these in order to grill them, but depending on what sort of vegetable grill basket you use on your grill, that might be an option as well.

Place the cleaned and trimmed sprouts in boiling, salted water for no more than five minutes, you just want to soften them a little. Next drain them and run them under cool water.

Drizzle the sprouts with oil and toss in a bowl with the salt, pepper, onion powder, garlic powder and celery salt. When the sprouts are nice and coated, skewer and place on a hot grill. Turn the skewer every four minutes for a total of twelve minutes. 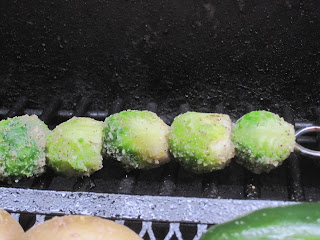 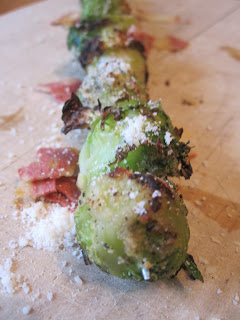 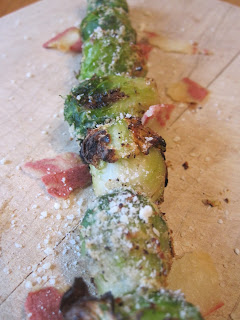 Dave and I both really enjoyed this recipe, I wish that I had made several more skewers of Brussels sprouts. The flavor of the seasoning was spot on, several got some nice char on them. I thought adding the cheese at the end was nice, but the crumbled vegan bacon was just okay with this. However, a nice side of balsamic glaze for dipping would have been amazing.