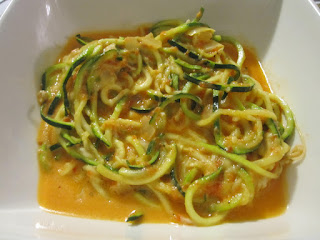 We love experimenting with the vegetable spiralizer, but I think that zucchini noodles might be our favorite thing to make. Zucchinis take very well to being spiralized and the noodle (or zoodle, if you will) that results has a similar texture to al dente pasta.

Combine the jarred roasted peppers, one tablespoon of olive oil and two ounces of goat cheese into a bowl. Use the immersion blender to process until smooth, then stir in the alfredo sauce.

In a large skillet, heat the remaining 1/4 cup of olive oil. Ad the onion and garlic, saute until the onion is softened. Then add the zucchini noodles to the skillet and saute until the noodles begin to soften, you'll want them to still be al dente. Add in the sauce and cook until the sauce is heated through. 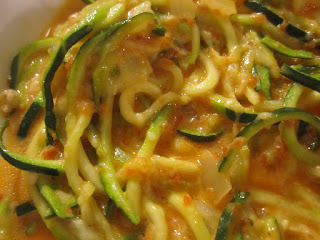 I added the alfredo sauce, because I had some sauce leftover in my fridge from another recipe and because my zucchinis were a little on the large side and the roasted red pepper sauce didn't seem like it would be enough to cover them sufficiently. You can omit the alfredo sauce if you'd like or if you want to skip over the red pepper sauce entirely and just douse your zoodles in alfredo sauce, that would be okay too. I enjoy lowering the carb amount in our dinners every once in a while and zucchini noodles are a great way to get a few servings of vegetables. Dave went back for second helpings and we didn't even have leftovers for lunch the next day.