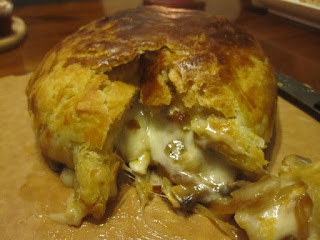 I originally saw this recipe posted on a blog run by a friend of mine from college. Whenever I make something that Stephanie has posted, it never disappoints. I decided to tackle this appetizer for New Year's Eve, because what says Happy New Year better than a glass of champagne and a wheel of brie?

Recipe from Whatever Pieces.

Take your puffed pastry out and place it on a plate so that it can thaw. This will take about 30-40 minutes.

In the same skillet, melt the remaining 1 tbsp butter. Add the mushrooms, garlic and thyme, and cook until the mushrooms brown, stirring occasionally. When the mushrooms begin to release liquid, add the soy sauce, vinegar, and wine. Continue to cook until the liquid evaporates add a little salt and pepper then add to another small bowl to cool.

Preheat the oven to 425F and line a baking sheet with a piece of parchment paper. I was able to use a sharp knife to slice the brie wheel into two halves pretty easily, partially because I used a smaller 8 ounce wheel of brie. If you're using 16 ounces of brie or have concerns that your knife will butcher the brie leaving you without a clean cut follow these steps from Stephanie which she did after freezing the brie:

Using a sharp knife, score the equator of the wheel, making a cut about 1/8– to ¼-inch deep all the way around. Work a piece of kitchen twine or plain dental floss into the cut, tying the ends together in an overhand knot. Pull the ends in opposite directions (as if you were tightening the knot) to cut through the cheese. Pull the two halves apart.

Now wrap the puff pastry around the brie and pinch together the edges to seal it. Flip the brie over so that the seam-side is down (this will help the pastry stay on the brie. Then brush the outside of the puff pastry with the beaten egg. Bake the brie for 20-25 minutes or until the pastry is golden brown on the outside.

Serve with bread, crackers, or vegetables. 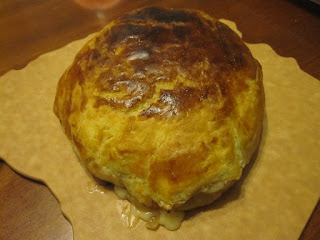 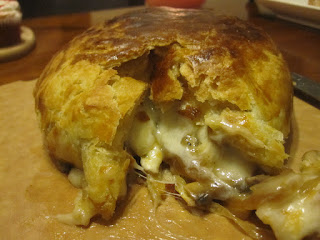 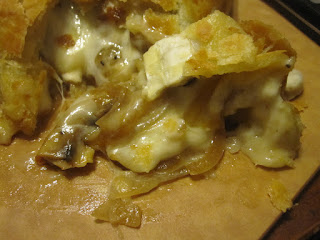 If course this was amazing and kicks off endless possibilities for stuffed brie. You could keep a savory route or even take things in a sweet direction using brown sugar and cranberries. I thought the presentation was nice and it was a fancy recipe for New Year's Eve. Dave and I were both happy with how this turned out and this is certainly a technique I will use again in the future.