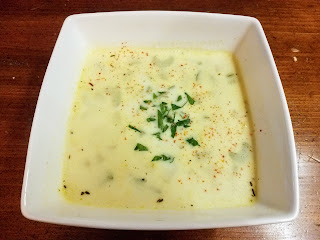 This soup uses onion, garlic, potatoes, and zucchini from our CSA basket. I know it's not really soup weather, but this was a great way to use the zucchini and potatoes that were accumulating in the kitchen. I'm starting to feel like there are only so many ways to prep zucchini in a way that's palatable and I know that we're going to keep receiving them for the next few months. I might be back to the zoodle drawing board after this recipe. I ended up with a soup that was a little less like chowder due to needing to add a little bit of broth during the cooking process. To remedy that, blend one more cup of soup during the blending step in order to have a creamier base.


Recipe adapted from the Little Broken

In a large stockpot, melt butter over medium heat. Add the onion, celery, carrots, garlic, and thyme. Cook until the vegetables begin to soften or for about 5 minutes.

Add the potatoes and then the water and vegetable broth. Finish with a bay leaf and then bring the soup to a simmer for 10 minutes or until the potatoes are halfway cooked.

Add the zucchini and corn and simmer for an additional 10 minutes or until the potatoes and zucchini are tender. Season with salt and pepper to taste, then discard the bay leaf.

Transfer two cups of chowder (or three if your soup seems like it has too much liquid) to a blender or to the blending cup that comes with an immersion blender and blend the soup until smooth. Stir this portion of soup back into the pot and stir in the the half and half until combined. Taste and adjust the seasoning as needed.

Serve dusted with cayenne and with parsley leaves.