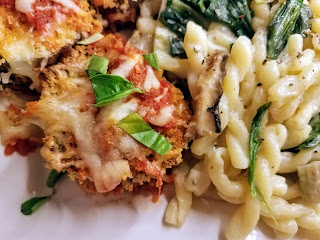 In an effort to not have the longest blog title ever I just left this at the pasta, but really the title should be Creamy Mushroom and Radicchio Pasta with Baked Eggplant Parmesan. I didn't want to get too crazy though. This was a great CSA week -- we received several ingredients that we had never received before (see our basket below). I used three of the CSA ingredients in this recipe and put together a few different ideas to create one cohesive dish. Since we only had one small eggplant to use, the portions of the ingredients should be doubled if you're using a larger eggplant or more than one. Dave and I both enjoyed this dinner, the pasta went well with the eggplant parmesan. The only thing I wish that I had done differently was maybe blanch the radicchio before throwing it in the pasta. We knew that it would have a bitter flavor, but from the one other time I used radicchio years ago I wasn't prepared for just how bitter it was going to come through in the dish. 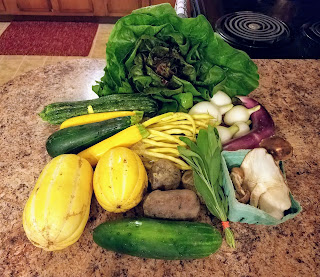 First, prep the eggplant and get it into the oven before starting the pasta. Sprinkle each eggplant slice with a pinch of salt. Place the rounds in a colander in the sink and allow them to sit for 15-30 minutes. This will help remove some of the bitterness from the eggplant as well as excess water. Rinse the salt off each slice, then pat dry. Preheat the oven to 425 and prepare a baking sheet with parchment paper.

In a small bowl whisk together the Panko, Italian seasoning, and 1 teaspoon of salt. In another small bowl whisk together the egg until smooth. Dip the eggplant rounds into the egg mixture and then into the breadcrumbs making sure to completely coat each slice. Place each slice onto the parchment paper lined baking sheet. Repeat with the remaining eggplant rounds. And then bake the slices for 20 minutes, flipping at the 10 minute mark.

Bake for 15-20 minutes or until the cheese has melted.

While the eggplant cooks, prepare the pasta.

Bring a large pot of salted water to a boil and cook the pasta according to package directions. Once ready, drain and set aside.

As the pasta is boiling heat 1/2 tablespoon of olive oil in a medium skillet over medium heat. Add the mushrooms and saute them until brown, for about 3-5 minutes. Season with 1/4 teaspoon of salt and black pepper. Empty the mushrooms into a bowl and set aside.


Serve the Creamy Mushroom and Radicchio Pasta with the Baked Eggplant Parmesan. 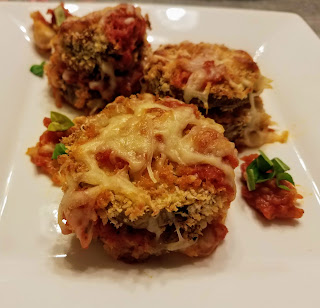 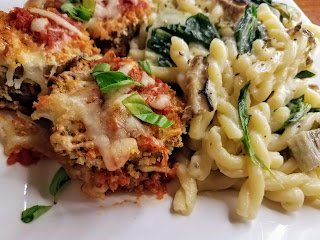 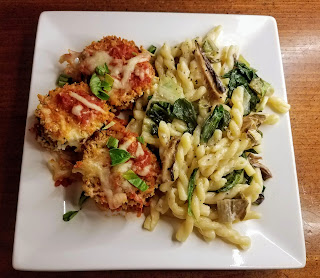 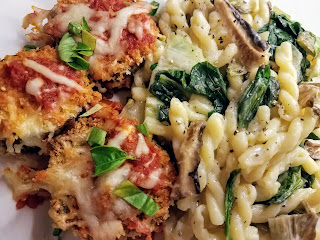 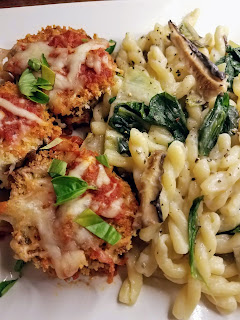