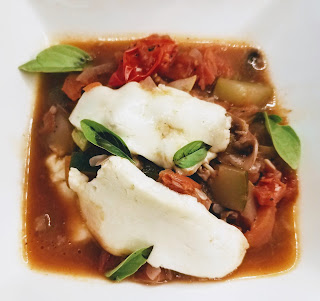 Halloumi is one of my favorite ingredients to use but it's expensive so I don't use it often. Halloumi is a sheep's milk cheese that can withstand high temperatures which allows it to brown but not melt. It's often described as grilling cheese because you can get beautiful grill marks on it. I first had halloumi in 2012 during a trip to England and I've been hooked ever since. This recipe used zucchini we had on hand from our CSA in addition to a tomato we received in our basket. There was a lot more broth than I expected in the finished product but I served this with bread to help sop up some of the broth. The halloumi cheese paired well with the acidic tomatoes and although the cheese is salty this will probably need significantly more salt and pepper than you think. 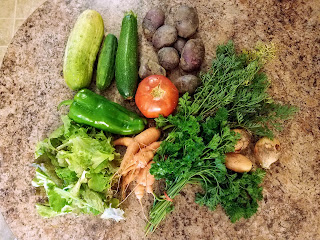 Preheat the oven to 425 degrees.

Heat a large skillet over medium-high heat. Add the mushrooms and onions and cook until both have softened and reduced. Add the zucchini and cook 2-3 minutes. Stir in the tomatoes and any tomato juices on the cutting board. Add the paprika and season with salt and pepper. Stir in the red wine. Cover and simmer 10-15 minutes or until the tomatoes are soft and have released their juices.

Pour the tomato and zucchini mixture into an ovenproof baking dish, sprinkle on the cherry tomatoes, and arrange the halloumi in an even layer over top. Bake for 10-15 minutes or until the cheese is golden. Top with fresh basil.