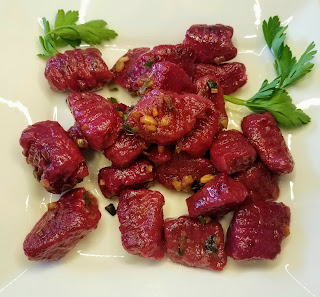 It's another CSA week, I'm always excited to go to the farmers market to pick-up our box and see some of the other seasonal vegetables that people are selling. We received beets in our CSA this week and although we occasionally use them in recipes we don't use them nearly as much as we did in 2015 when my parents grew an overabundance of beets. I knew that I wanted to make something to show off their beautiful color and since we didn't have any plans on Sunday we decided to try to make beet gnocchi. The gnocchi turned out great and the nutty brown butter sauce nicely complemented the earthy flavor of the beets in the gnocchi. I served the leftovers with a light alfredo sauce. 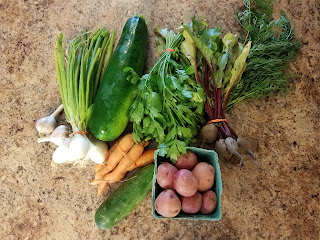 Gnocchi recipe from Salty Seattle at The Feed Feed.

**Makes enough sauce for half of the gnocchi. Double if you plan to serve all four servings of gnocchi at once.

To make the gnocchi:

Puree the roasted beets, egg, and ricotta in a food processor. Add the mixture to the flour in a mixing bowl and stir to combine. Gently knead the dough until it just comes together (don't over-knead!). Flatten the dough into a disk and cover the dough with plastic wrap and refrigerate for at least 30 minutes.

Cut the dough into four sections and working with one at a time roll the dough into cylinders about 1/2 inch in diameter. Cut each cylinder into 1/2 inch pieces and roll each gnocchi over the tines of a fork. Repeat until all of the dough has been turned into gnocchi. I had about 100 pieces once I was finished.

Start your sauce in a large skillet by melting the butter over low heat and sauteing the garlic and sage in the butter until browned.

Boil the gnocchi in several batches in salted water and remove with a slotted spoon when they float.

To serve, add the gnocchi to the skillet with the brown butter sauce and saute in the sauce for about five minutes. Serve hot with the extra brown butter from the pan drizzled over top. 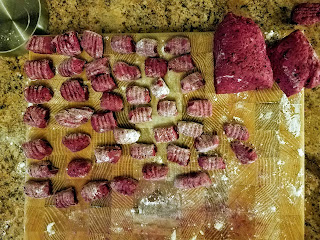 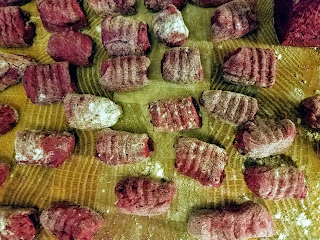 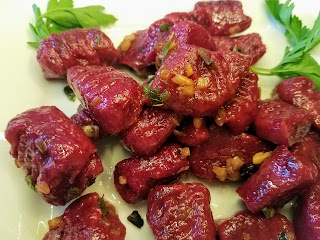 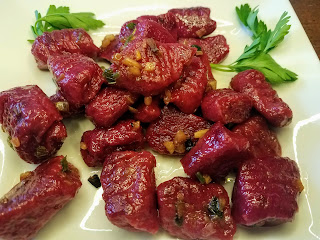 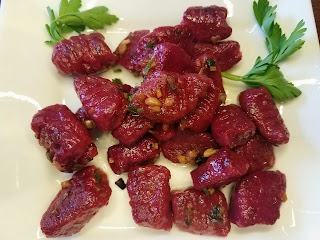 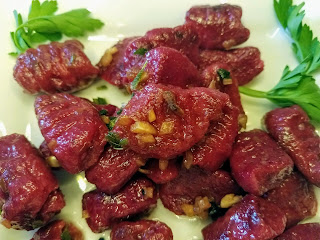