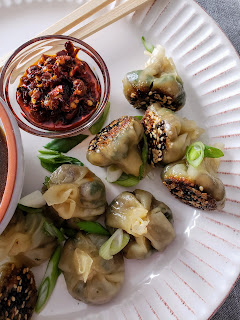 I was drawn to these dumplings as soon as I saw them on Instagram so I was happy to have a long weekend that gave us the opportunity to make these on a day off. It was certainly a time-consuming process but Dave and I both loved these dumplings. I'm already ready to make them again and double the batch. We ate a serving and a half each when we first made these and froze the rest for later in the week. Freezing them was the perfect way to keep them fresh and the sauce held up well in the fridge for a few days. The filling is flavorful and the sauce added nice umami to the dumplings. We served half with chili crisp which added heat to the dumplings. Due to the size of the wrappers I used we ended up with 42 small dumplings but this will vary based on the size of the wrappers you use.

To make the sauce combine all of the ingredients in a bowl and whisk together.

Heat the sesame oil in a large skillet and then add the shallots cooking until fragrant. Add the mushrooms, ginger, and garlic. Cook, stirring occasionally, until the mushrooms have cooked down which will take about 5-10 minutes. Add the soy sauce and black pepper. Stir in the spinach and cook for 2-3 more minutes until the mushrooms are caramelized. Remove from the heat and allow to cool.

To assemble the dumplings spoon about 1 tablespoon of filling into each wrapper. Brush water around the edges of the wrapper and then fold the edges of the wrapper up around the filling. Pinch the center of the gathering to seal. Once you've done one or two you'll know if you need to adjust the amount of filling based on the size of the wonton wrappers. Repeat until all of the filling has been used.

Heat a few tablespoons of oil in the large skillet (with a lid). Once the oil is hot add the dumplings and cook 2-3 minutes. Carefully pour 1/4 cup water into the skillet, be careful because it will splatter. Cover the skillet with a lid and turn the heat to medium-low. Steam the dumplings for 5-6 minutes and serve with the sauce.

We froze these on a baking sheet for 30 minutes and then added them to a freezer-safe container. We cooked the frozen dumplings as directed but steamed them for 9-11 minutes. 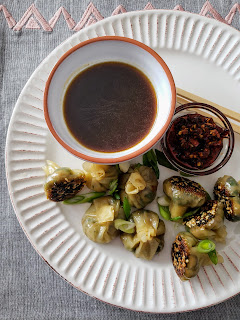 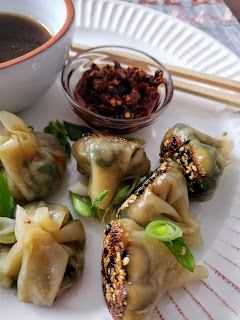 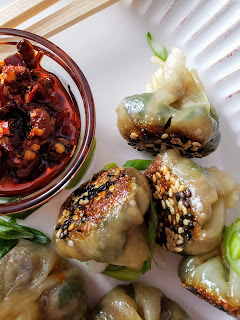 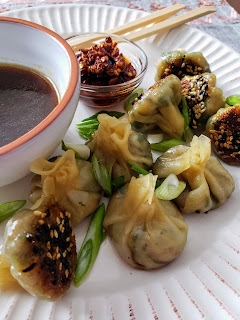 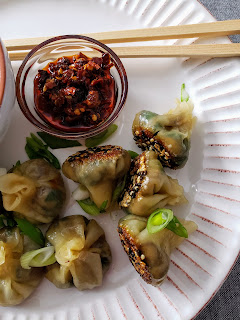