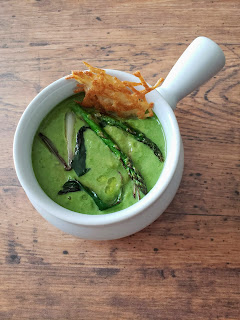 We were a little skeptical about this soup but had most of the ingredients on hand so it made sense to try it. Overall we both thought the soup was really good, the ramps mellowed out a bit when cooked so they didn't overpower the asparagus. I would recommend serving this alongside something else though because the soup is incredibly low in calories. Grilled cheese would have been a good side but I also had it alongside a cheese quesadilla during one of my work from home days.
Recipe from Serious Eats.
Ingredients:
-1 pound asparagus stalks, fibrous root end trimmed
-Kosher salt
-1/2 pound trimmed ramps, divided (see note)
-1 tablespoon unsalted butter
-Freshly ground black pepper
-1 cup vegetable broth
-1/2 cup plain Greek yogurt
-1/8 cup extra-virgin olive oil, plus more for drizzling
-1/2  tablespoons juice from 1 lemon

Heat one tablespoon of butter in a large skillet until melted and then add the ramps. Cook, stirring frequently until the ramps are tender and starting to brown. Season with salt and add the ramps to the blender (reserving some for garnish if desired). Add the vegetable broth and yogurt to the blender and process until a thick soup consistency is reached. Drizzle olive oil into the running blender and then season the soup to taste.

Pour the soup into a sauce pan and heat. Stir in lemon juice before serving and top with the asparagus tops, ramps, and a drizzle of olive oil. 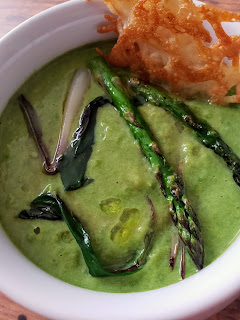 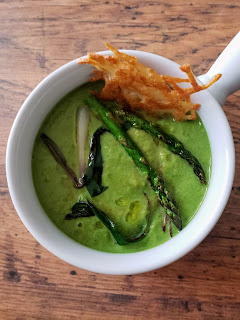