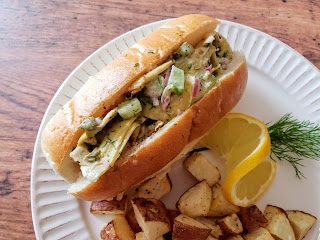 Like everyone else, I receive a lot of ads for meal prep services and meal plan kits. I tried both Blue Apron and Hello Fresh years ago and while I liked having everything delivered to my door neither was really saving me time or money so I eventually dropped them and went back to doing my own thing. Now I'm getting a lot of ads for vegan meal prep companies which is intriguing but I know it will just go the same as before. One ad a few weeks ago featured a similar "lobster" roll recipe from Purple Carrot and I thought it looked delicious. Unfortunately, I couldn't find heart of palm at my local grocery store and really wanted to use the red potatoes from my first CSA so I substituted artichoke hearts to make up the "meat" of my lobster roll. Having never eaten a lobster roll I thought this was a fine lunch although a bit low calorie (I ended up eating two lobster rolls for lunch). Dave thought this had good texture and flavor as well.

Ingredients:
-10 oz mini red potatoes, chopped
-14 oz quartered artichoke hearts
-1 teaspoon cajun seasoning
-1 shallot, minced
-1 celery stalk, minced
-1/4 ounce fresh dill
-1 lemon
-1/4 cup light Miracle Whip
-2 teaspoons capers
-4 brat buns, sliced along the top
-1 tablespoon vegetable oil, divided
-Salt and pepper
Preheat the oven to 425°F. On a foil-lined baking sheet toss the artichoke hearts in vegetable oil, season with cajun seasoning, salt, and pepper. Roast the artichokes for 18-20 minutes, flipping halfway, until lightly browned.
Toss the potatoes in vegetable oil, salt and pepper, then roast in an air fryer at 350°F for 15 minutes, stirring halfway, until crispy.
While the other vegetables are roasting make the dressing. Mince the shallot and celery. Finely chop the dill. Zest and juice half the lemon and cut the other half into slices for serving. Combine the shallot, celery, dill, one tablespoon of lemon juice, light Miracle Whip, and capers in a medium-sized bowl. Mix and taste for seasoning.

Toast the brat buns and remove the potatoes and artichokes from the oven.

Toss the roasted potatoes in the lemon zest and arrange as the side dish. Fold the roasted artichoke hearts in the dill dressing. Divide between the four toasted brat buns and serve with a lemon slice. 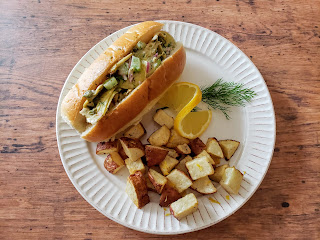