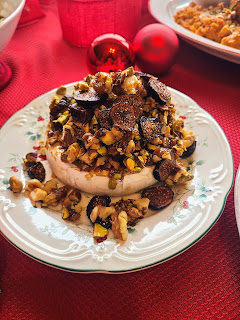 I can't believe it's almost Christmas! For this year's Christmas dinner I did a lot of the prep work the day before which really cut down on the time spent preparing the meal which I think is important on a busy holiday. For this recipe, I shelled all of the pistachios the day before and chopped them with the walnuts so it was just out of the way. I love baked brie as an appetizer and I think this came together pretty seamlessly. I will say that the proportions were a little off. The initial recipe called for a 13-ounce wheel of brie but mine was the standard 8-ounce. The toppings below are the proportions I used but if you want there to be less, then definitely cut back to 1/4 cup for each topping.

Recipe from The Mediterranean Dish.

Preheat your oven to 350. In a small dish heat the fig jam in the microwave for 30 seconds to soften. Combine half the jam with the mission figs, pistachios, and walnuts. Place the brie in an oven safe dish and top with the remainder of the jam. Top with the figs/nuts and bake for 15 minutes or until softened.

I kept this simple and served it with crackers I already had in the pantry but baguette would be a nice option as well. 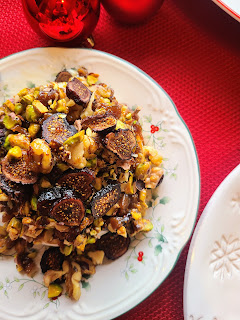 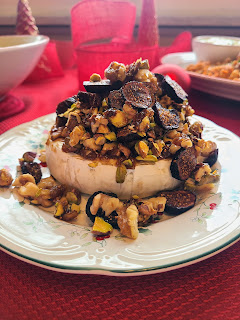