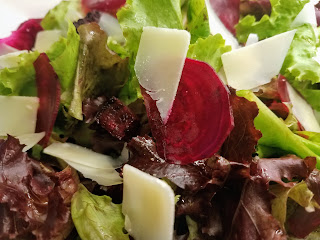 We're starting to get really good at making and eating salads. With all of the greens coming in our CSA basket weekly I've been trying to get creative. I love that this salad had the beets prepared two ways for a varying flavor and texture. I reduced the dressing significantly, because we didn't need as much as the initial recipe called for to dress both of our salads.

This was also very easy to make while we were prepping the Zoodle Alfredo with Peas at the same time.

Slightly adapted from Food and Wine.

Prep your beets by peeling all four beets and then cutting three of the beets into bite sized pieces. Preheat the oven to 400 degrees. In a small baking dish toss the chopped beets with a small amount of olive oil and season with salt/pepper. Roast the beets for 30-35 minutes or until fork tender.

While the other beets roast use a mandoline to thinly slice the remaining beet as well as the Parmesan cheese.

In a large bowl combine the olive oil, orange juice, and balsamic vinegar. Season the dressing with salt and pepper. Add the roasted beets, shaved beets, and Parmesan cheese over the mixed greens and toss with the dressing to coat. 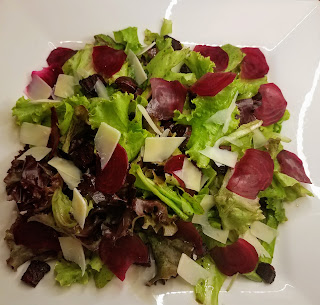 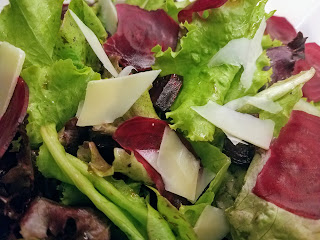 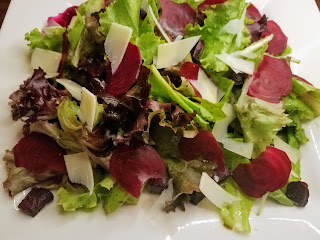