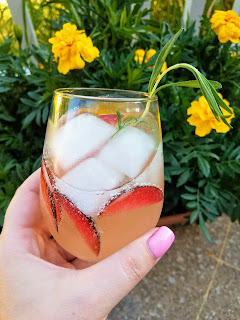 Smash: A family of cocktails that involves a fruit, an herb, and alcohol. (History of the Smash)

This cocktail is summery and light and easily adaptable. I was hoping to use purple basil in this, but it seems that Japanese beetles found that plant significantly more tasty than any of our others. The plums are a beautiful garnish to the glass and two cocktails won't be enough -- you'll want to make seconds and thirds.

Inspired by My Diary of Us.

Thinly slice half a plum as garnish and then peel and chop the remaining one and a half plums.

Muddle the peeled and chopped plums with the rosemary simple syrup and lemon juice in a cocktail shaker. Add ice and shake until chilled.

Pour the simple syrup mixture over ice between two glasses and top with prosecco. Garnish the drinks with the plum slices and small rosemary sprigs.

**To make the rosemary simple syrup combine 1/2 cup of sugar, 1/2 cup of water in a small sauce pan. Add in three large rosemary springs and bring to a boil. Once boiling remove from heat, stir, and let cool. Chill until ready to use. 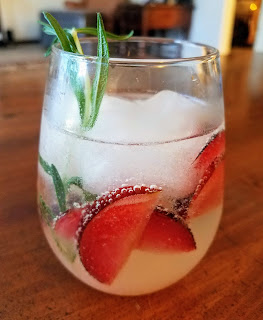