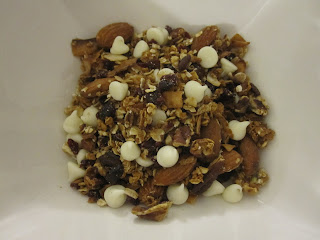 We're really enjoying the bulk section in our new grocery store, it allowed us to pick up the perfect amount of ingredients for this granola without ending up with extra shaved coconut, almonds, or pecans.

Recipe from Gimme Some Oven.

Combine the oats, almonds, pecans, and coconut in a large mixing bowl.  In a separate bowl, whisk together the maple syrup, melted coconut oil, cinnamon, vanilla extract, and salt together until smooth.  Pour the maple syrup mixture over the oats mixture, and toss until everything is evenly mixed.

Spread the granola mixture out evenly on a the prepared baking sheet and bake for 25 minutes, pulling the mixture out at the halfway point to stir it, before you finish the baking.  Remove and let cool until the granola reaches room temperature. Stir in the dried cranberries and white chocolate chips and toss to combine. Eat alone or topped with almond milk.


Dave and I were both pretty happy with how this turned out. Dave wished that he had purchased a white chocolate bar to cut up for this recipe, I had some white "chocolate" chips in the fridge, but once he had added them to the granola, he wasn't sure if they were actually white chocolate or just vanilla chips. I especially liked eating this with almond milk in the morning.