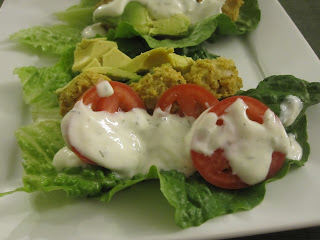 This recipe takes a few healthy short-cuts to make a falafel wrap that is healthier than traditional recipes without leaving out any of the flavor.


Recipe from the MyFitness Pal Blog.


Preheat oven to 375 degrees F, line a baking sheet with parchment. In a food processor, add the chickpeas, onion, lemon juice, garlic, cumin, salt, pepper, olive oil, baking soda and sesame seeds. Pulse until you have a thick paste. In a large mixing bowl, add the chickpea mixture, quinoa and parsley. Stir together until evenly combined.

Form the falafels with your hands by taking about 2 tablespoons of the mixture at a time. Gently roll in your hands to form a ball, and then place it on the baking sheet. Continue with the rest of the batter.

Bake for 30 minutes in the oven, until lightly browned and slightly crispy on the outside.

While the falafel bakes, make your sauce by combining all of the yogurt sauce ingredients in a small bowl and whisking them together until combined.

Build your lettuce wraps by layering the falafel, tomato slices, avocado, and sauce in a romaine lettuce leaf.

We both really liked this recipe, baking the falafel rather than frying it made the falafel balls much less dark on the outside than they usually are, but I thought that they still had good texture. I love pita bread, but turning this into a lettuce wrap instead of using pita was such a good idea and it helped the recipe to feel light.