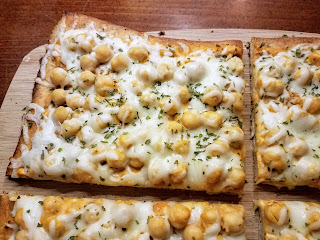 I keep waiting to grow out of pizza being my favorite food, but the possibilities are endless with pizza which is one of the things that makes it so appealing. In addition to all of the melted cheese, that really helps. When I was in high school (before I became a vegetarian) our big thing at sleepovers was ordering buffalo chicken pizza. There was just something about the too spicy buffalo sauce, mixed with cheese and chicken, dunked into blue cheese or ranch dressing. In the early days of Vegetarian & Cooking! I made a lot of buffalo cauliflower recipes, trying to mimic chicken as the vessel that helped add a little something to all of that sauce and cheese. The memory of those buffalo chicken pizza sleepovers came back to me the other day and I realized I had never made a vegetarian style buffalo pizza.

I love this recipe, because the sauce is made out of hummus and the addition of the chickpeas on top just gives this even more of a protein boost. This buffalo chickpea pizza was easy to make and all of the flavors came together nicely, the cayenne pepper on the chickpeas gives this an added level of spice in addition to the buffalo sauce.

Par cook the pizza crust, we cooked the crust for half of the cooking time suggested on the package. I was worried the hummus would make the crust too wet to bake through.

Toss the chickpeas with the olive oil, salt, pepper, and cayenne, and mix to combine. Set aside.

Spread the buffalo hummus onto the crust, top with the chickpeas, followed by the cheese. Bake until the crust is done. Top with parsley. 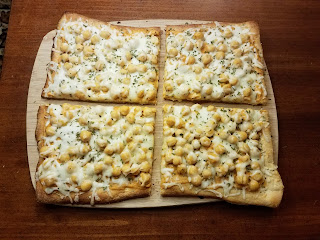 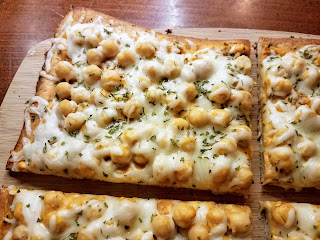 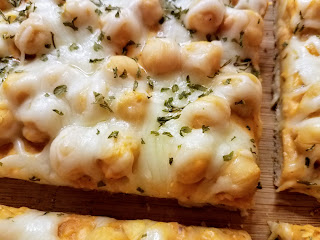 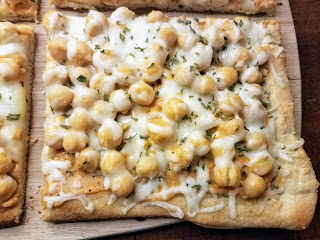