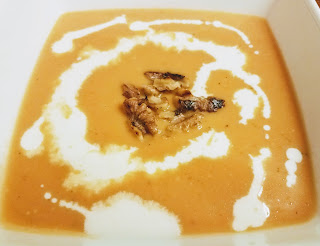 The snowy cold is finally here and although it's a bit early I'm down for soup weather. We wrapped up our final CSA box back at the end of October -- thank you so much to Birdsong Farm Ohio for the delicious produce throughout the summer and early fall.

Back when I first started the blog, every Wednesday had a theme for each season and winter was solidly in the Soup Wednesday category. With so many holiday events coming up in November and December I've been trying to plan out our meals for two weeks at a time that way I can make sure that we're eating at home rather than going out throughout the week. In the next two weeks, I already have several more soup recipes on deck and I'm here for it. This soup was easy to make and had great flavor. The leftovers held up for lunch at work a few days later as well.

Preheat the oven to 400 degrees and poke a few holes in each sweet potato. Bake for one hour or more, until the sweet potatoes are fork-tender. Once they are roasted slice them in half and allow them to cool slightly.

Add the maple syrup and cinnamon stick to a large soup pot, bring to a boil and then reduce the heat to a low, simmer for 10-15 minutes or until the maple has thickened to a honey-like consistency.

At this point the sweet potatoes should be cool enough to handle so peel off the skins and add the sweet potatoes to the pot with the maple syrup. Remove the cinnamon stick, then add vegetable broth, thyme, nutmeg, cayenne and a pinch of salt and pepper. Blend with an immersion blender until smooth. Cook over medium heat until the soup has warmed through then stir in the cream. Cook another five minutes before adding the cheese and cooking until the cheese has melted. For optional garnish, top with toasted walnuts. Serve warm!