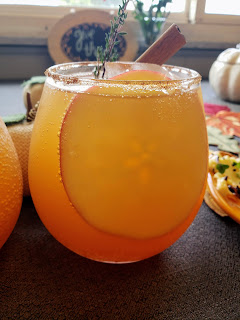 For the cocktail this year I wanted to do something light and I thought this Cider Aperol Spritz was a nice option. I did not have the Aperol on hand but I had everything else already so that made this even easier to put together. The end result is a light cocktail full of Aperol and apple cider flavor that pairs well with a cinnamon sugar rim. I added the thyme for a bit of color in the garnish but it didn't add any additional flavor to the drink. The recipe below makes one drink but it was an easy enough recipe since the cocktail is measured into the glass so making more than one will be relatively easy.
Pair with:
Chili Crisp Butter Board

Garnish: sliced apples, cinnamon sticks and thyme sprig
Cinnamon Sugar
-3 Tablespoons Granulated Sugar
-1 teaspoon Ground Cinnamon
Rub the edge of each class with a slice of lemon and then dip the glass into the cinnamon sugar mixture. Add ice to each glass. Combine the apple cider, Aperol, and champagne in each glass. Top with club soda and garnish with a cinnamon stick, slice of apple, and sprig of thyme to serve. 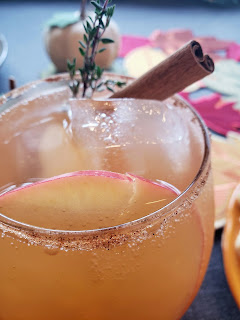 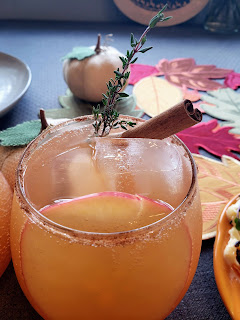 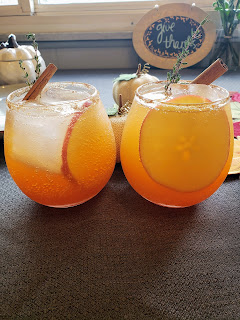