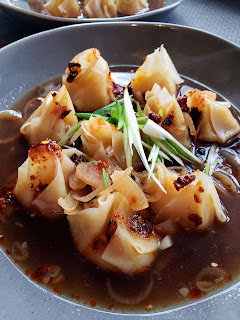 I've now made this recipe more than once and each time it turns out perfectly. If you use the small square wonton wrappers it has also made exactly 38 dumplings each time I've made it. I know that making dumplings seems like a lot of work for the holidays but I love that these can be made in advance and even frozen if you want to make them the week before. The ginger broth helps elevate the flavor of the dumplings and they are like fall in a bowl. The chili crisp here ties nicely into the butter board from earlier this week and there are similar ingredients used in the brussels sprouts from yesterday. We used frozen butternut squash to cut down on time if you are looking to make this even more quickly.

Cook the butternut squash until tender (since we used frozen we steamed it in the microwave).

Combine the cooked squash, green onions, honey, and black pepper in a bowl. Mash together with a fork.

Spoon up to a tablespoon of filling into each wrapper. Brush the edges with water and fold the edges together to form a dumpling (it should look like a small purse). Pinch the folded edges of the wrapper together to help seal the dumpling and then repeat with the remaining wrappers and filling.

To make the broth, melt the butter in a large skillet and cook the shallots over medium-heat until softened. Add the wine and cook for 5-10 minutes or until the shallots are caramelized. Add the ginger and garlic. After one minute, add the vegetable broth, soy sauce and cinnamon stick. Bring to simmer.

In another large skillet heat a few tablespoons of oil over medium heat. Add the dumplings and cook for 2-3 minutes or until the bottoms are golden brown. Carefully pour 1/4 cup of water into the skillet and cover. Let the dumplings steam for 4-5 minutes.

Serve the cooked dumplings in a bowl with the broth ladled over top. Add chili crisp and sliced green onions to taste. 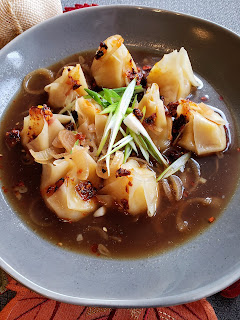 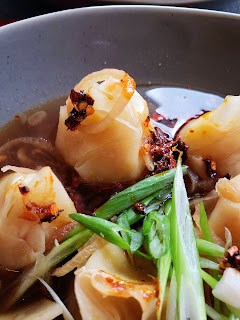 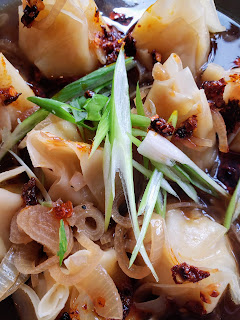 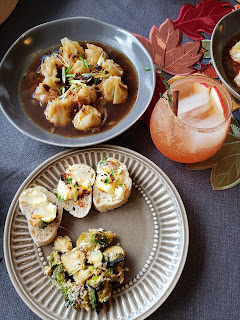