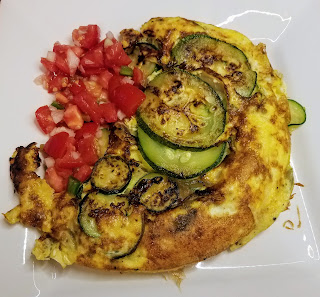 People compliment me frequently on the photos I post of my cooking on social media. Just to help prevent the illusion that I'm this amazing cook who makes zero mistakes -- half of this recipe ended up in the sink. I always flip Spanish tortilla over the sink and apparently with good reason. Dave had to work late and I was rushing to get dinner put together so when the bottom of the tortilla was cooked I grabbed the nearest cutting board which was large enough for the skillet, but a little undersized compared to others I own. During the flip everything seemed to be going great until I heard a "plop" and saw half of the tortilla slide into my sink. At least half of the recipe was salvaged and I've learned my lesson to utilize a large cutting board and to remember that the top of the Spanish tortilla is very slippery since it's not 100% set. To see a more successful version from a long, long time ago on this blog check here: Tortilla Española.

The half that we were able to eat was great, this was such a simple way to use zucchini and it also allowed me to use up some tomatoes and jalapeno that I had from our CSA. I think the pico de gallo was necessary to add brightness and more flavor, but you can skip the sour cream if you'd like.

Heat 1 tablespoon of olive oil in a 9 inch pan. Add the red onion and zucchini slices and cook until softened, stirring occasionally. Add the garlic and cook for 30 seconds and set aside.

Meanwhile, beat the eggs, half and half, and seasoning in a large bowl. Stir in the zucchini mixture. Add the remaining olive oil to the skillet and make sure to fully coat the bottom and the sides. Pour the egg/zucchini mixture into the frying pan and cook for 8-10 minutes until the bottom and sides are set.

The top will still look very wet, but you should be able to run a spatula along the edges.

Return to the heat and cook for an addition 8-10 minutes or until the bottom is set.

Cut into wedges and serve with pico de gallo and sour cream. 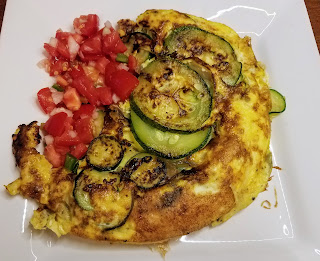 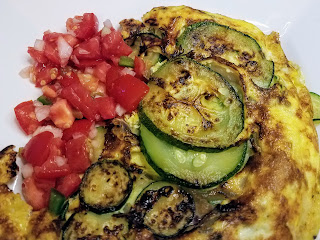 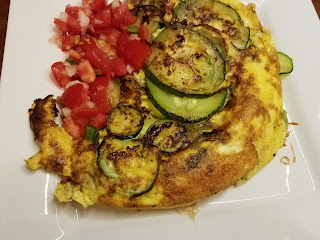