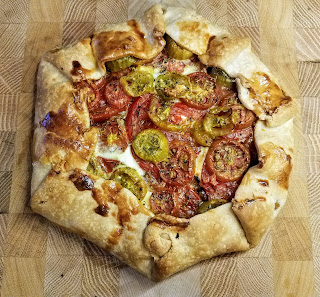 In this latest CSA basket we moved from an abundance of zucchini to an abundance of tomatoes. With three different tomato varieties in the basket and Dave picking up even more tomatoes at work, we have been eating tomatoes in some variety for almost every meal. These tiger tomatoes from our CSA were so pretty I wanted to show them off as much as possible. Galettes are a great way to use summer produce with a more elevated presentation than a pizza. Overall, this galette was very easy to make, as I've said many times before I hate making pie crust and very rarely make it from scratch so we used one that was already prepared. Dave and I both thought this galette turned out good and it gave us plenty of leftovers for lunch. 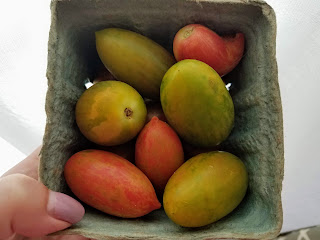 In a small skillet heat the 2 teaspoons of olive oil. Add the shallots and saute over medium heat until the shallots start to caramelize. Remove from the heat and set aside.

Preheat the oven to 375 and begin to warm a pizza stone. Roll the pie crust out onto a non-stick working surface. Add the crumbled goat cheese in an even layer over the pie crust leaving a 2 inch border around the outside, drizzle the goat cheese with two tablespoons of honey, and top with the caramelized shallots. Top with the sliced tomatoes and season with salt and pepper. Sprinkle fresh thyme over the tomatoes to finish. Fold up the edges over the tomatoes and brush the crust with the beaten egg.

Bake the galette for 1 hour or until the crust is golden. Allow to sit for 3-4 minutes before slicing to serve. 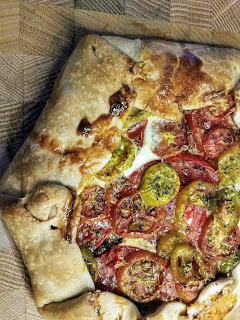 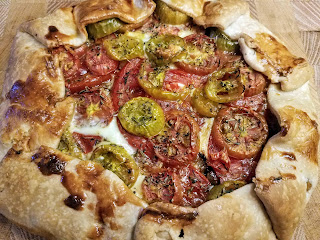