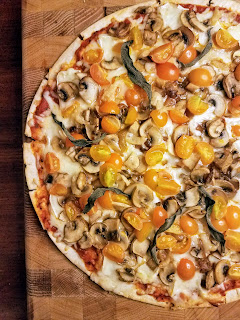 It's another CSA week here in our household and we have an abundance of tomatoes. I always try to anticipate what we will receive in the next box so that I can have ingredients on deck for Wednesday night dinner. For a while I anticipated getting zucchini in each box but now that we're receiving that less frequently I'm glad that I anticipated more cherry tomatoes. The pizza crust we used to make the Wedge Salad Pizza came in a two pack so we had pizza twice in a row. This crust is a local store brand and is relatively low calorie so I don't feel guilty about having multiple pizza nights in one week. After having brie on a frozen pizza from Trader Joe's we were inspired to come up with our idea of a brie pizza. I thought the flavors in this went together really well, with so many ingredients on the pizza it was a little difficult to eat with such a thin crust so I wish that we had used a thicker base. 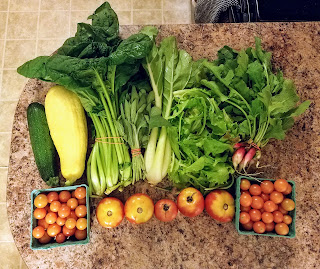 Ahead of time, preheat the oven to 375. Slice the top off a head of garlic and drizzle the exposed cloves with olive oil. Season with salt and pepper. Wrap the garlic in a piece of foil and roast for 45 minutes - 1 hour.

Prepare the pizza crust according to package directions, as necessary. Ours came fully cooked. Top the crust with the tomato sauce, mozzarella cheese, brie cheese, tomatoes, sauteed onions and mushrooms, roasted garlic and sage. Bake until the cheese is melted and the topping are hot, ours took about 10 minutes. 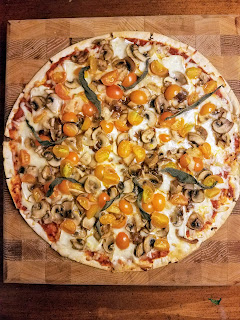 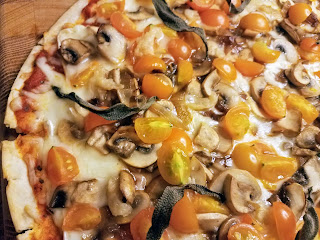 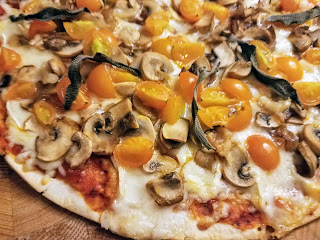