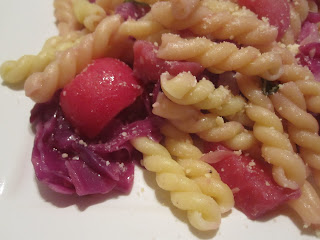 I'm still on my quest to use all of these beets that I've acquired, I'm really surprised at all of the recipes that can be made with beets. This one was on my Pinterest board for a while, even before I knew that I was going to end up with a lot of beets. Thank you Food Network.

Bring a large pot of salted water to a boil. Add the pasta and cook as the label directs.
Meanwhile, whisk 3 tablespoons olive oil, the vinegar and beet juice in a large bowl; season with 1/2 teaspoon salt and a few grinds of pepper. Add the beets, radishes and radicchio and toss well to coat. Set aside.

Heat the remaining 2 tablespoons olive oil in a large skillet over medium-high heat. Add the red onion, garlic, 1/2 teaspoon salt and a few grinds of pepper. Cook, stirring occasionally, until the onion is softened, about 4 minutes; add to the beet mixture and toss to coat. Now pour the entire beet mixture into the large skillet and saute for a few minutes or until the cabbage starts to wilt. Once the veggies are slightly cooked, pour them back into the large bowl.

Add the pasta, basil and 1/4 cup or parmesan; season with salt and pepper. Top each serving with the remaining cheese. 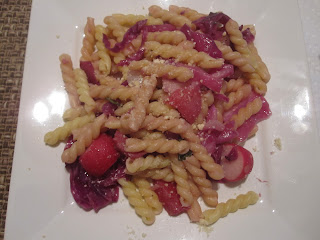 This recipe was just okay. The original left the radishes, beets and cabbage raw, once I realized that I put it into the skillet to heat up a little. I think this would have been better with some sort of sauce, even if it was a quick sauce, maybe an alfredo. Overall, it was a nice vehicle for using up some beets, but it wasn't a stellar recipe.