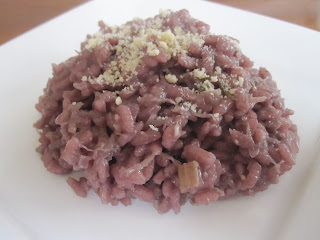 I'm about to go on a ridiculously lengthy beet kick. My parents have an over abundance of beets in their garden which has resulted in Dave and I experimenting with recipes to use beets. I never realized that you can put beets in pretty much anything. I will try to include other recipes in the next few weeks, but free beets are really helping to cut down my grocery bill and surprisingly we're not tired of the beets yet.

In a small sauce pan heat the vegetable broth, you don't want it to boil, but it should be warm.

To make the risotto, heat the olive oil in a large skillet. Saute the onion and garlic until the onion is translucent. Add the arborio rice and stir around in the oil until all pieces are coated. Now add the wine and stir the rice until almost all of the wine is absorbed. Add in the grated beetroot. Now add ladlefuls of vegetable broth repeating the same process as before, stirring the rice/liquid until almost all of the liquid is absorbed into the rice, then adding more liquid.

Once the rice is sufficiently plump (you'll use almost all, if not all of the broth) stir in the butter and parmesan until both are melted into the risotto. Stir in a pinch of dill and serve with additional cheese on top. 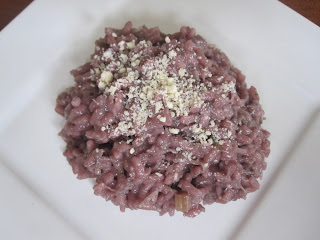 People are often intimidated by risotto, but it's actually pretty easy to make, it just takes a little patience. This risotto was full of flavor, the beets and dill played off each other really nicely. The cheese helped to make the risotto a little more rich and creamy. Overall, we were pretty satisfied with how this one turned out.