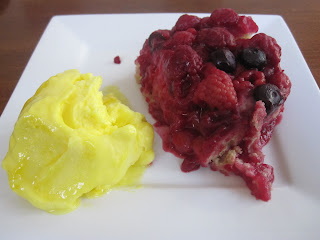 Recipe from Chef in Training.


In a large bowl, combine the flour, sugar (three tablespoons), baking powder and cinnamon. In a small bowl combine egg, milk and canola oil. Whisk together until completely blended. Add the egg mixture to flour mixture and stir until just moistened.

Serve with frozen yogurt or sorbet. 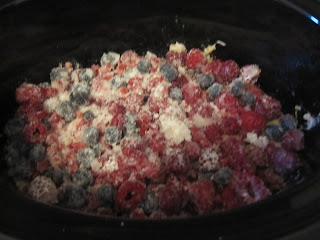 We served ours with lemoncello sorbet, I think the citrus paired nicely with the berries and the light sweetness in the cobbler dough. I had to double the batter recipe since I have a large slow cooker, as a result this took about 2 1/2 to 3 hours for the batter to set.