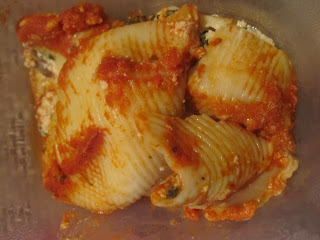 I had a total blogger fail with this recipe. This recipe can be used as a freezer meal and I did not properly defrost it before baking it on the night I planned for these shells to be dinner. After baking for an hour, they were still frozen in the middle and we ended up with take-out. I continued baking the shells until they were done and then immediately portioned them into tupperware for our lunches. As a result, I have no good pictures of this recipe except for the photo above of my lunch. It was really good and many a lot of portions though, so I'm going to blog it anyway.

Recipe from Oh My Veggies.

Heat the oil in a large skillet over medium heat. Add the garlic and mushrooms and cook for about 4 minutes, until softened and lightly browned. Stir in the chard and heat until wilted, 1-2 minutes more. Remove from heat and season with salt and pepper to taste.

Use a slotted spoon to transfer the mushrooms and chard to a large bowl; discard any leftover liquid. Stir in the ricotta, Parmesan cheese, and Italian seasoning. Taste the filling and add more seasoning if desired, then fold in the egg.

Spread 3/4 cup of marinara sauce on the bottom of a medium baking dish that's been sprayed with cooking spray. Fill the pasta shells with the ricotta mixture and place them in the baking dish. Once all the shells are filled, spoon the remaining marinara sauce over the top, then sprinkle with the mozzarella cheese.** At this point if you want to freeze the meal like I did, just wait until cooled and then cover with foil and pop into your freezer. Avoid my mistake and make sure to adequately thaw the meal in the fridge before baking.**

Preheat the oven to 350. Cover the baking dish with foil and bake for 30 minutes; remove the foil and bake for 15 minutes more, or until the cheese is melted and the sauce is bubbling. Let the shells sit for 5 minutes before serving.

We ended up being able to fill about 18 jumbo shells with the ricotta mixture and this recipe allowed us to have almost a whole week of lunches already portioned out. Aside from me failing to properly defrost the dish before baking it, freezing this worked out well. I thought the filling had really nice flavor and I liked that it was full of veggies.