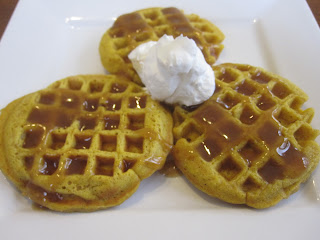 Although I don't love pumpkin flavored things, I'm always trying to integrate at least a few pumpkin recipes into my fall blogs. This recipe particularly intrigued me because of the homemade Apple Cider Syrup that went on top of the waffles, it sounded divine, even if pumpkin didn't.

Both recipes from Cooking Classy. The recipe as is will make 7-8 Belgian Waffles and 2 cups of Apple Cider Syrup. I cut the waffle recipe in half which made 18 mini waffles.


In a large mixing bowl whisk together flour, baking powder, baking soda, salt, cinnamon, ginger and nutmeg until well blended. Create a well in center of mixture then set aside.

Next in a a medium mixing bowl add the egg whites and cream of tartar. Use an electric hand mixer set on high speed, whip until soft peaks form, then add two tablespoons of the granulated sugar and whip until medium-stiff peaks form.

While whisking, slowly pour milk mixture into flour mixture and mix just until combined (batter will be slightly lumpy), then fold egg whites into batter.

Spray your waffle iron of choice with cooking spray and make the waffles.

Top with your syrup of choice or the Apple Cider Syrup: In a medium saucepan whisk together brown sugar, cornstarch, cinnamon, allspice, ginger, cloves and salt until cornstarch is evenly distributed. Stir in apple cider and apple cider vinegar and set mixture over medium-high heat. Bring to a boil stirring constantly. Allow to boil for one to one and a half minutes while continuously stirring, then remove from heat, stir in butter and allow to cool until warm. The syrup will really thicken up as you allow it to cool slightly.

I topped my waffles with a small dollop of light Cool Whip too. 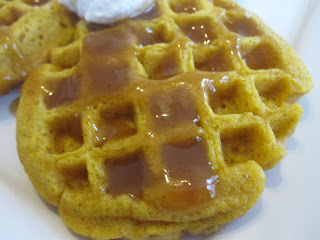 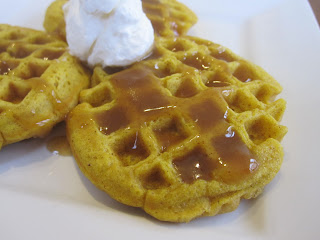 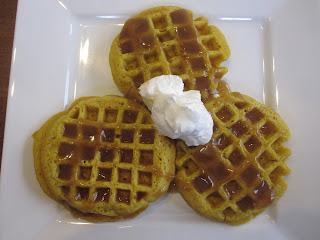 This was such an awesome recipe. I actually liked the pumpkin waffles, I think it's because they were lightly seasoned and not overwhelmingly full of pumpkin spice seasoning. The Apple Cider Syrup really made this dish for me though, I think it really helped to tie everything together. The whipped cream was also good on this too, the waffles and syrup aren't too sweet on their own, so the whipped cream helped to elevate the sweetness slightly.