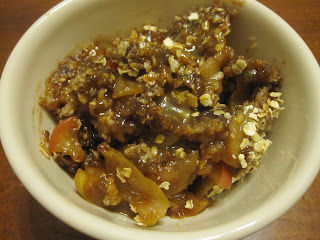 We still have a surplus of apples from when we when apple picking a few weeks ago. I thought this apple crisp would be a nice, cozy, fall recipe.

10 cups of apple slice was equal to about 4 large apples for me, obviously it will be difficult to get a perfect measurement, but try to get it as close as you can.

Recipe from Add a Pinch.


Preheat your oven to 350º  and then spray 9x13 casserole dish with non-stick cooking spray.

Next make the topping by adding the butter and flour to a large bowl. Cut butter into flour with your fingers until you have a pea sized crumble. Then mix in the brown sugar, 1 cup of oats, cinnamon, and nutmeg. Add vegetable oil and spread on top of apple mixture.

Spread remaining 1 cup of oats on top of oat and flour mixture, lightly pressing into the other topping.

Bake until apples are tender and top of apple crisp has crisped and turned golden brown, about 45 minutes. 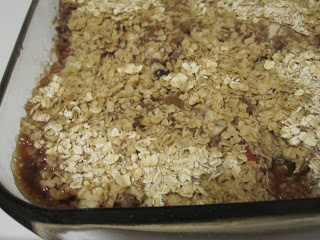 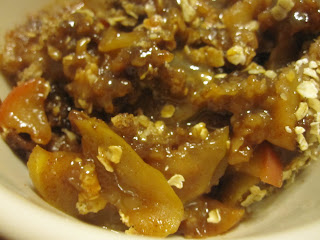 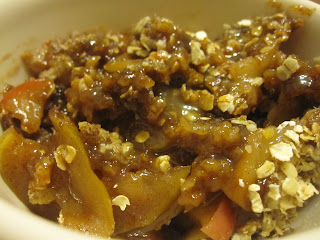 One issue I had was that my butter was not cut into the crust enough, that's why in the picture of the apple crisp in the pan, you can see that some of my oats didn't toast nicely. The butter is what helps turn those golden brown once you bake the casserole. Aside from that mishap, this turned out great. I kind of wish that I had cut the recipe in half, this was a lot of apple crisp for both of us. Overall this used quite a few apples, had great flavor and was delicious with caramel sauce drizzle over the top.