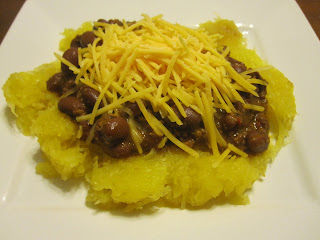 Happy World Vegetarian Day! Yep, that exists, it's the kick-off to Vegetarian Awareness Month. Being a vegetarian is awesome for so many reasons, but you already found your way here, so I won't bore you. I wanted a fun, but healthy recipe for this post and tackling the Ohioan staple of Cincinnati chili seemed like a good way to go. You can make your own veggie chili if you'd like, but using a canned vegan chili will make this even easier to make. This is a wonderful week night meal.

There are five "ways" to order Cincinnati Chili:

As you can see mine is a Three-way chili, because it's topped with just the chili and cheese. I used spaghetti squash instead of noodles to lighten up this dish even further.

Heat the Amy's Organic Chili until warmed through.

Top a heaping plate of spaghetti squash with the chili and cheese. Add additional toppings if you'd like your Cincinnati Chili to be a four or five way. 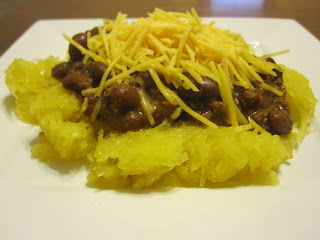 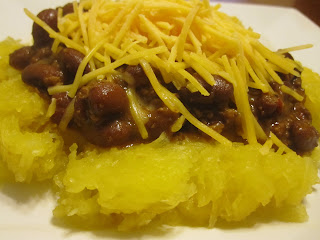 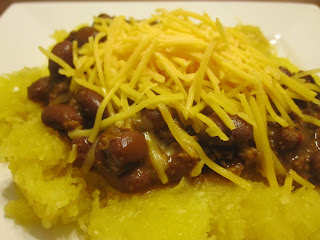 This recipe was amazing. When everything was mixed together it tasted so good. I'm glad I purchase the spicy chili, it had just the right amount of heat to it and it paired nicely with the plain spaghetti squash. This Butternut Squash Chipotle Chili would be a nice addition to this recipe if you'd prefer to make plenty of chili to go with the spaghetti squash.