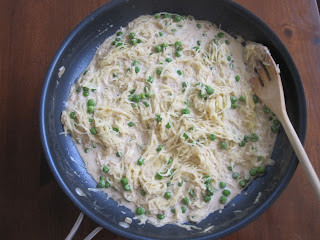 Cut the spaghetti squash in half and roast for one hour at 400 degrees. Once cool enough to handle, scrape out the stands from the shell.
Heat a small amount of oil in a large skillet, add the shallot and thyme to the skillet and cook until softened, about 2 minutes. Stir in the wine and cook, scraping up any browned bits, until mostly evaporated, about 1 minute. Add the heavy cream, nutmeg, 1/2 teaspoon salt and a few grinds of pepper.

Increase the heat and cook the sauce until slightly thickened. Stir in the peas and parmesan cheese. Continue cooking until the sauce is thick and creamy, about 1 more minute. Remove from the heat.

Add the spaghetti squash to the sauce. Return to medium heat and cook, stirring, until combined, about 1 minute. Season with salt and pepper. 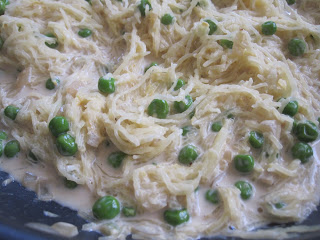 I really enjoyed this spaghetti squash recipe, the sauce was full of flavor and I forgot that I wasn't eating traditional pasta. The peas added a little something extra to the recipe, I had omitted a pancetta substitute, but this would be good with some mushrooms in it as well.